The year climate change came to Norway: The great drought of 1947. 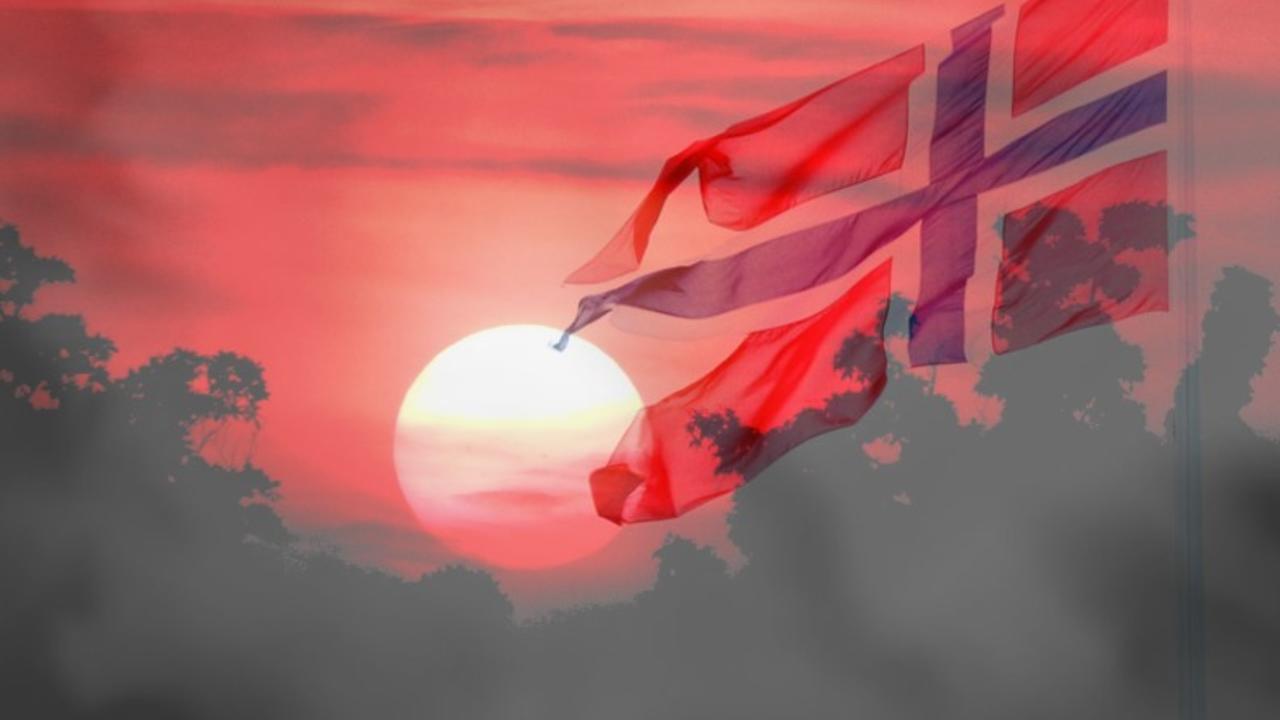 This article was inspired and informed by a paper given by Magnus Vollset at the International History of Meteorology Conference in Bergen, Norway in November 2014. The words are mine, but most of the research is Magnus's. Big thanks to him for letting me share it with you!

The year 1947 was a strange one in Norway. A very cold winter gave way to an extremely dry season. The summer of 1947 was dry throughout Europe, but Norway was especially hard-hit. Weather records from Oslo in July and August showed there were only 2.2 millimeters of rain for an entire month--the average was 102 millimeters (about 4 inches). For many weeks the sun blazed down mercilessly, and newspapers began to make fun of the heat, depicting the drought and unusual weather in humorous political cartoons. The newspapers began asking meteorologists, many of whom worked for the state, when the rains would return. Their forecasts showed only an endless march of sunny days to come.

As the rain continued to stay away--even in Bergen, a city known for its frequent rains--things got worse. The Norwegian School of Agriculture characterized the 1947 growing season as having seen less than a quarter of the usual amount of rainfall for the whole season, and only about half the country's usual amount of crops would be produced. Power companies began rationing electricity. Rivers and streams dried up and became pathways of parched dust. Everybody was on-edge as colder weather approached. In the fall, the government recommended to farmers that they butcher their own farm animals and store the food to make their supplies last the whole winter. What was an environmental disaster soon became an economic and human disaster.

Droughts come and go in all parts of the world quite often, but the great drought of 1947 pinched hard because of the circumstances surrounding it. It had been only two years since Norway was liberated from Nazi occupation after Hitler and the Germans were defeated at the end of World War II. Although Norway suffered less physical destruction than many other European countries did in the war, the effect of the occupation on its small population was extremely traumatic. In 1947 families were still trying to find each other, count the dead and put their lives back together after the long brutal disruption of Nazi rule. The Norwegian state--independent only 35 years before the Germans marched in--was trying to find housing for its displaced population returning home, and trying to get its economy moving again. A massive drought with deep economic impacts was the worst possible thing that could happen at that time. In 1947 Norway joined many countries receiving aid from the United States in the form of the Marshall Plan, which hoped to kick-start the rebuilding of Europe and prevent damaged countries from falling into the orbit of the USSR. 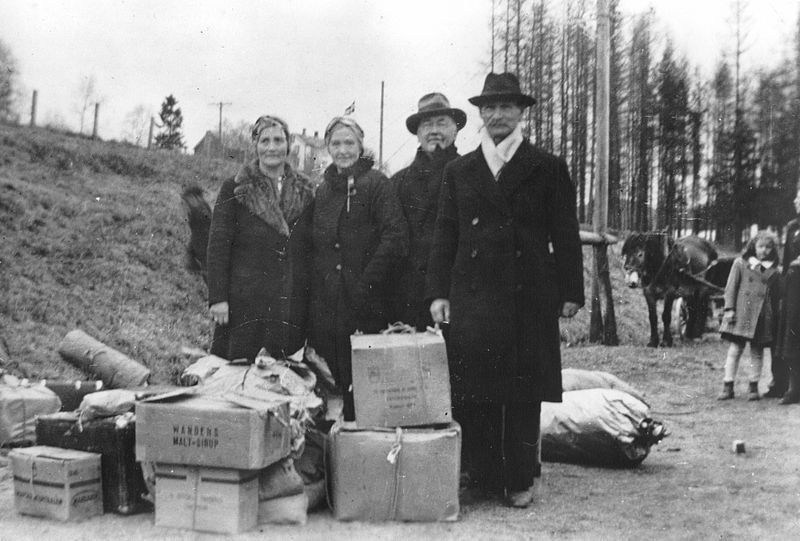 Having just come out from under four brutal years of Nazi occupation, Norway in 1947 was still trying to put itself back together. Many people, like these Norwegian refugees, were still trying to find permanent homes and reunite with their families.

The rains eventually did return, but the drought of 1947 had some very interesting effects that lingered after it was gone. Toward the end of 1947 Frederik Vogt, who was the head of the Norwegian Water Resources and Electricity Works, wrote to colleagues at the Norwegian Academy of Science. The drought had gotten Vogt thinking about whether Norway's climate was changing. "If you can develop fairly reliable prognosis for climate variations in the coming years or decades," Vogt wrote, "this would be of great practical importance for how we manage the power supply." Although he was trying to solve a pragmatic problem in his job of delivering energy to Norway, Vogt was connecting what happened in 1947 to a broader process of worldwide climate change, which scientists were just beginning to notice.

The Norwegian Academy of Science responded. They set up a task force--the first of its kind in Norway--to study the problem of climate change. The group included meteorologists, botanist, an oceanographer, a glacier expert, an astrophysicist, and a historian. The group began looking at indications of Norway's climate in the past in order to form a baseline that could help them determine what climate might do in the future. Unfortunately they couldn't develop anything that could serve as a blueprint for better weather predictions, but what they did discover was validation of the theories of Theodor Hesselberg, a pioneer of Norwegian meteorology, who argued that Norway's climate changed more between 1894 and 1944 than it had in the entire 200 years before that. Obviously something very momentous was happening.

The Norwegian Academy task force was a milestone in the understanding of climate change, but it certainly wasn't the whole answer. For one thing the experts mostly believed that the changes were being caused by the sun--the idea of greenhouse gas warming due to manmade processes, what we now know to be the engine of most modern climate change, had been proposed in the 1890s but was still working its way into scientific discourse in the 1940s. For another thing, the experts were focusing on something that had little application to what people on the ground, in Norway and other countries, really wanted: accurate extended weather forecasts, not climate theory. The Norwegian power companies that funded the group wanted to know when they should spread around their power supplies to avoid what had happened in 1947. Thus, the group started to get distracted from what they'd originally been brought together to study. 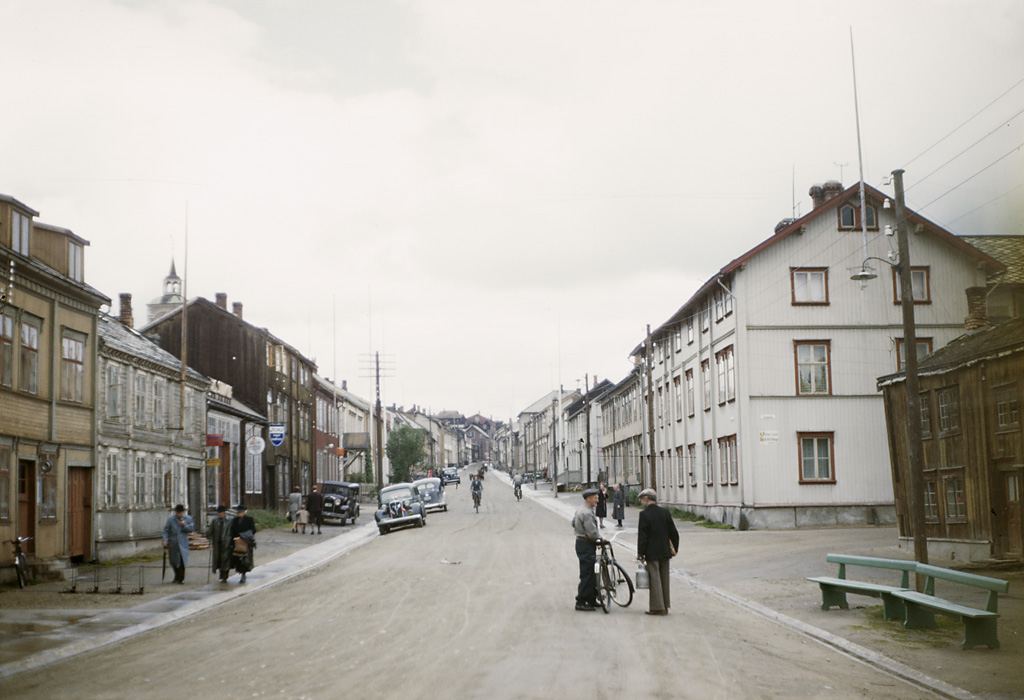 This is what Røros, Norway looked like in the late 1940s. At the time of the drought Norway was still a relatively poor country, but it was beginning to join the ranks of soon-prosperous Western European economies.

The final irony for the task force came when a group of four meteorologists from Bergen--which by the 1940s was a pioneering city in the science of weather forecasting--began compiling weather data from radiosondes across the Northern Hemisphere for those crucial months the drought started in the spring of 1947. (Radiosondes are essentially drones that go into the upper atmosphere, collect weather data and return to the ground). What they could have learned about the great drought of 1947, however, was quickly taken off the table when the meteorologists found that more recent readings, beginning in late 1948, were much more complete. The idea was to develop methods for extended weather forecasts, not necessarily to do a post-mortem on the 1947 drought. Thus, the drought passed away from the task force's attention.

Because it got distracted by the business of weather forecasting, the scientific group that had originally assembled to study Norway's most unusual recent weather event ultimately petered out in the 1950s into a series of essentially unrelated weather research projects. The group broke up and most of its members went on to take academic jobs in Norway's rapidly expanding university system. It fell to later researchers to flesh out the full understanding of the problems of climate change that have become so crucial in our modern world. Alas, the 1947 drought might have led them there, but keeping their attention focused on it might have been asking too much.

Was the 1947 drought caused by anthropogenic climate change? It's very hard to prove, but there's very little that has occurred in world climate in the last 80 to 100 years that's not related, in some way, to the problems of manmade climate change. As we now well know, droughts, hurricanes, blizzards and other "extreme weather" events are very often side effects of climate change processes. The farmers who butchered their cattle in the dry fall months of 1947 could have had no way of knowing it, but the ultimate causes of their woes that year may well have been blowing in the winds that whistled through the forests and fjords of Norway. Climate change had come to the proud land of the Vikings.