Conservatives are terrified of the past. Let's teach children to be unafraid. 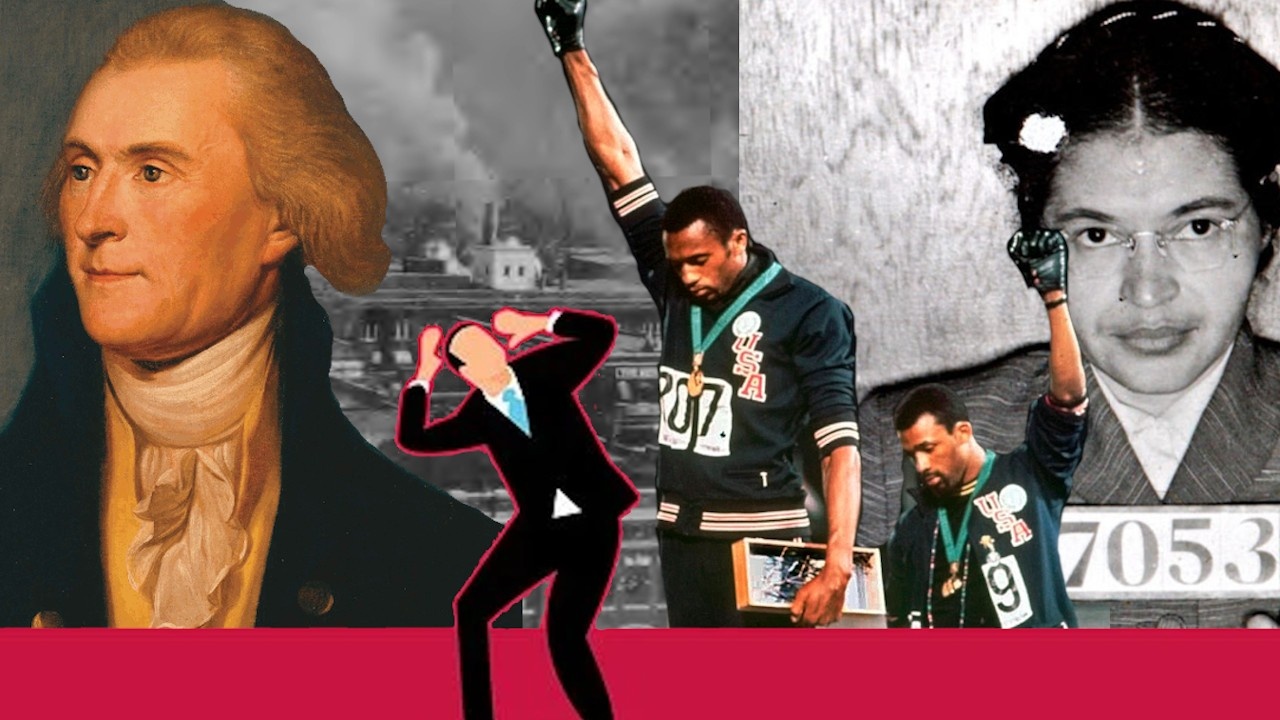 Right now, in America, history and history teachers are under fire from political conservatives. The now-famous buzzwords "Critical Race Theory" are sweeping the country, and conservative politicians in red-leaning states are following the cues of Fox News and other far-right-wing media by rushing to ban what they perceive as this pernicious concept. Schools are being forbidden to teach "CRT." Teachers who incorporate it may be fired or censured. Just the other day a far-right-wing Christian group called for teachers to be wired up with body cams to check on whether they're teaching the dreaded "CRT." This is right here, in the United States of America, where a part of the Constitution that conservatives seem to have forgotten would ostensibly prevent such a notion from ever becoming law. As a history teacher myself, I've inevitably been asked about this controversy.

A lot has been written on this recently and I don't need to rehash it all. This, like so much else of what we're arguing about in America these days, is purely a political controversy ginned up to drive eyeballs to the advertisers of Fox News and other propaganda outlets. Simply put, the conservative politicians who rail the loudest against "CRT" have no idea what it is, and no desire to find out, because the facts would reduce the usefulness of "CRT" as a culture war issue that they can campaign on. But the controversy exposes a deeper and more fundamental unease that American conservatives have. They are deeply afraid of the past, are made uncomfortable by it, and don't know how else to deal with their discomfort except by lashing out at teachers, who are a convenient scapegoat for problems that conservatives don't wish to solve. The brouhaha over "CRT" is fairly new, but unease over the facts of history and what they mean is very, very old. Historians have been dealing with it for a long time.

Simply put, history often makes people uncomfortable because it challenges narratives of the world that they want desperately to believe. When the narrative is challenged, some people find it easier to try to blame the historical facts rather than question the narrative. Conservative politicians on the warpath over "CRT" are, at least in some cases, quick to say that they just want teachers to "teach the facts." But this is false. They don't want us to teach the facts, at least some of them. It's the facts that are exactly the problem.

Case in point: the Tulsa massacre. Just recently (June 1, 2021) was the 100th anniversary of the most egregious racially-motivated massacre in American history, when whites, outraged at the growing economic prosperity of a sector of Tulsa's African-American population, literally razed the city's Black business district to the ground. Airstrikes were called in against American citizens who had done nothing wrong, right here in America. This was in 1921; a few people living today were alive then. I recently included the Tulsa massacre in a class I taught to 6th graders this spring. The Tulsa massacre is historical fact. It happened. Would the conservatives who would ban "CRT" prefer I not include the historical fact of the Tulsa massacre in a 6th grade class? Probably. Why? Because in their eyes it makes America look bad. 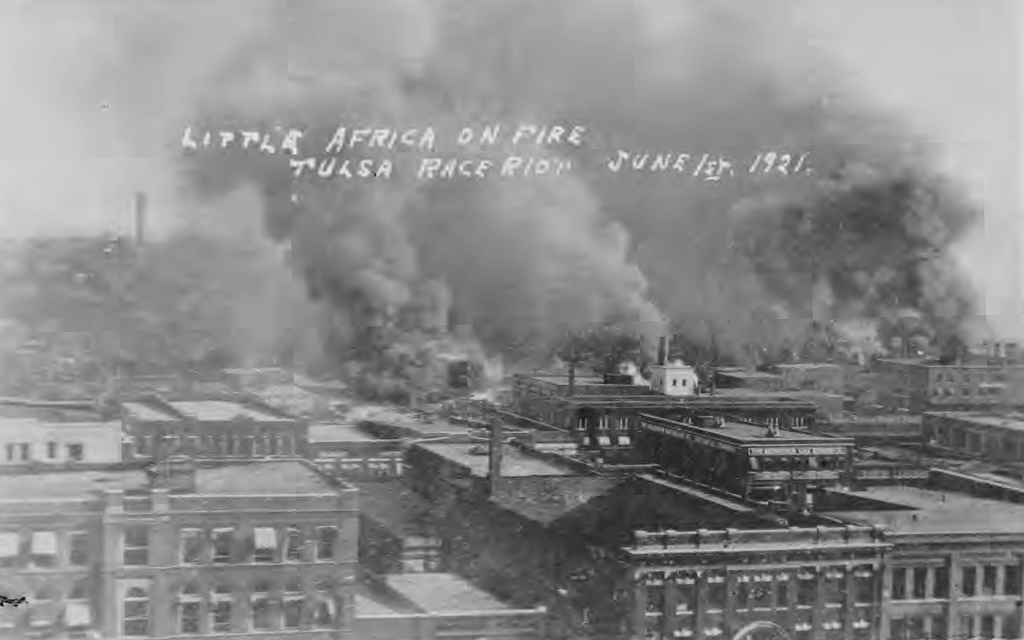 It certainly does, but quite frankly, that is not my problem. If you hire me to teach history, you're hiring me to teach what happened. Whether you're upset about the conclusions your children may draw from that history couldn't be less important to me. What is important to me is that students think about what these events mean, and how America might be made better in the future so things like the Tulsa massacre don't happen again. We can't change the past, but we can change the future.

Let's take another historical fact that anti-"CRT" conservatives would probably prefer be left out of the triumphant narrative of the American Revolution, which is certainly what former President Donald Trump's ludicrous "1776 Project," canceled by Biden on the first day of his administration, wanted to emphasize. When he was chosen as a delegate to the Second Continental Congress, Thomas Jefferson rented rooms in Philadelphia in the home of Jacob Graff, a few blocks from the State House, now known as Independence Hall. Jefferson brought with him a slave, 14-year-old Robert Hemings, to serve as his valet during the Congress. Hemings, who was related by blood to Jefferson's wife, slept in the attic or garret of the Graff House, which has since been reconstructed as the "Declaration House," now part of the Philadelphia historical park celebrating the Declaration of Independence.

Jefferson wrote the drafts of the Declaration in his room at the Graff House. Presuming that he occasionally called for Hemings to bring him a drink or otherwise serve him during the process of drafting, it is entirely possible that a slave was actually in the room at the moment Thomas Jefferson wrote the words "all men are created equal" in the draft of the Declaration of Independence. If Hemings wasn't in the room, certainly he was nearby. Think about that: the man whose words were the source code of American liberty had a slave, a human being whom he owned, right in front of him when he came up with those words. 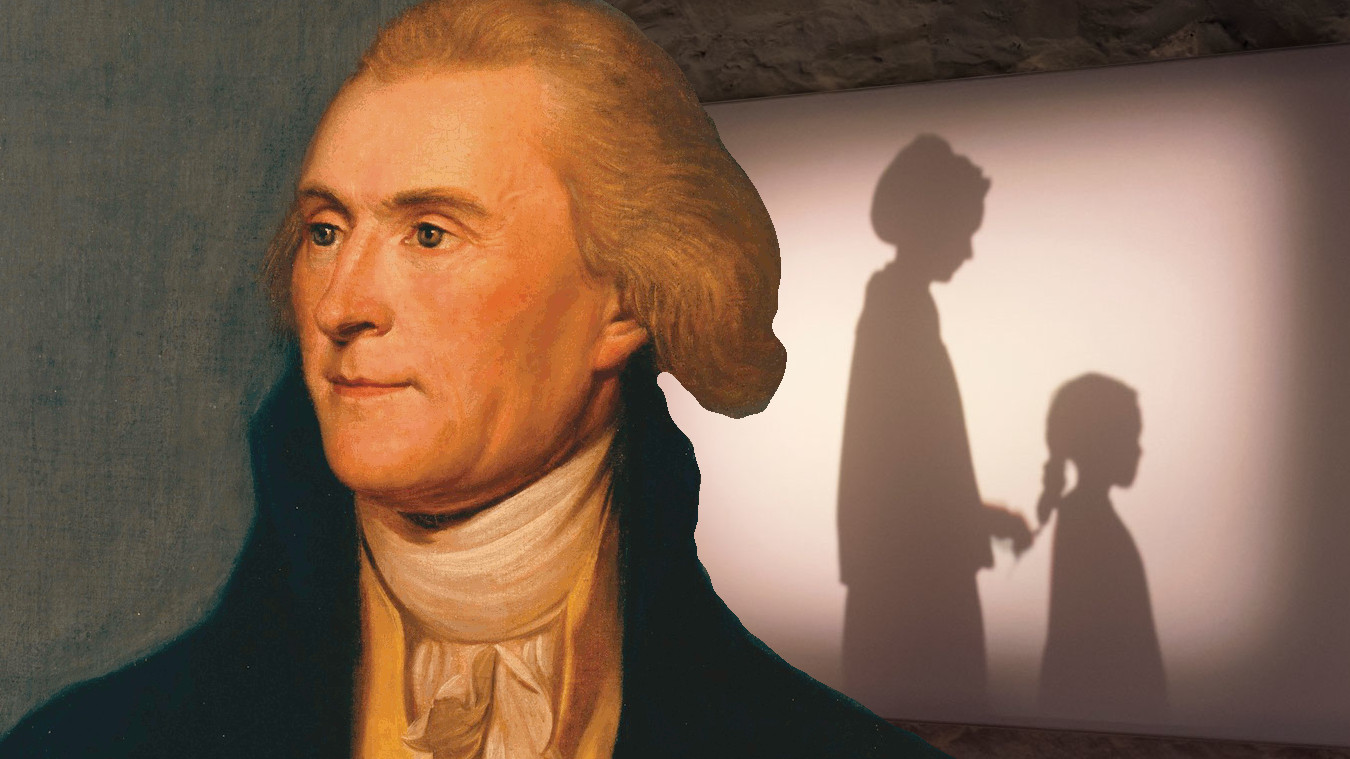 Does the fact that Jefferson was a slaveowner who proclaimed equality--the central contradiction at the core of Jefferson the historical figure--undermine the promise of freedom and equality that seems to have been encoded in the Declaration of Independence? Maybe it does. But if it does, why should we fear grappling with that contradiction, and, by extension, why should we fear to teach the fact that Jefferson was a slaveowner? Conservatives have no answer to this question.

Oh, some may try to come up with one, and mumble some mealy-mouthed talking points about teachers making people "feel guilty" for the color of their skin. This nonsense isn't even worth taking seriously. Again, if you are a conservative white man living in 2021 and you think I'm making you "feel guilty" because another conservative white man who died in 1826 owned slaves, and had children with his slave concubine, and also owned his own children as slaves, that's your problem, not mine. I'm not going to not teach the reality of who Jefferson was, or the nature of his relationship with Sally Hemings. The facts will be taught. Period. You don't have a choice in that matter. You have a choice how you think about them and interpret them. In fact, that's the whole point of history.

This is why I have no hesitation--not even the slightest bit of hesitation--to include the facts of racial and structural inequities in American history in lessons to be taught.

Was the U.S. Constitution a compromise with slaveholders, deliberately designed to perpetuate the institution of slavery? Yes, it was. Historical fact.

Did the result of the Presidential election of 1876, awarding the White House to Rutherford B. Hayes, cause the end of Reconstruction and the abandonment of African-Americans to almost a whole additional century of repression under Jim Crow laws? Yes, it did. Historical fact.

Did American sugar planters foment an illegal coup against the government of Hawaii, Queen Lili'uokalani, in 1893 for the purpose of presenting Hawaii for annexation by the United States? Yes, they did. Historical fact.

Did Franklin D. Roosevelt, the President who created the New Deal and won World War II, put 110,000 people of Japanese descent, most of them American citizens, into internment camps in 1942 based on racial profiling? Yes, he did. Historical fact.

Do I make white students feel "guilty" for these things? Of course not. To my knowledge I have never had a student who owned slaves, who made political compromises with slaveowners, who participated in the overthrow of the Hawaiian government, or who put Japanese-Americans in internment camps. You see how silly the "teachers make students feel guilty" argument really is.

Conservatives rarely focus on the positive side of whatever they think "CRT" is. In addition to facts about Jefferson, the Constitution, the Tulsa Massacre and Japanese internment, I have also taught about the long genesis of the Civil Rights Movement, particularly among Black law professors and their students at Howard University Law School. Conservatives love conspiracy theories, so they should love this one. Howard University was the nucleus of a vast coordinated plot, stretching over 60 years, to train bright African-American students as lawyers and place them into strategic positions at organizations like NAACP and CORE, so they could challenge in court discriminatory laws and practices on a rolling basis that would, over decades, significantly advance racial equality in numerous aspects of American life. The plan was extraordinarily successful.

This conspiracy, which eventually reached far beyond Howard University, ultimately involved Thurgood Marshall, the Black lawyer who won the Brown v. Board of Education case in 1954 and who later sat on the Supreme Court; Rosa Parks, who volunteered to be the flash point for the Montgomery bus boycott that ended segregation in public transport; and Pauli Murray, a racial equality and LGBT activist who worked with Ruth Bader Ginsburg and numerous other activists past and present. This, too, is historical fact. It's been my experience that what most students know about Rosa Parks is that she sat down on a bus in 1955. Few have ever heard of Howard University, but if you're in my class, you'll know about it.

See? Isn't that a part of whatever conservatives think "CRT" is? If they don't want me to teach that Jefferson owned slaves or that biplanes were used to bomb the Black business district of Tulsa in 1921, would they also like me to leave out Thurgood Marshall, Brown v. Board, Rosa Parks and Pauli Murray? I'm not sure how anti-"CRT" conservatives would answer that question. They'd probably grunt some nonsense about "indoctrination" and try to end the conversation quickly. 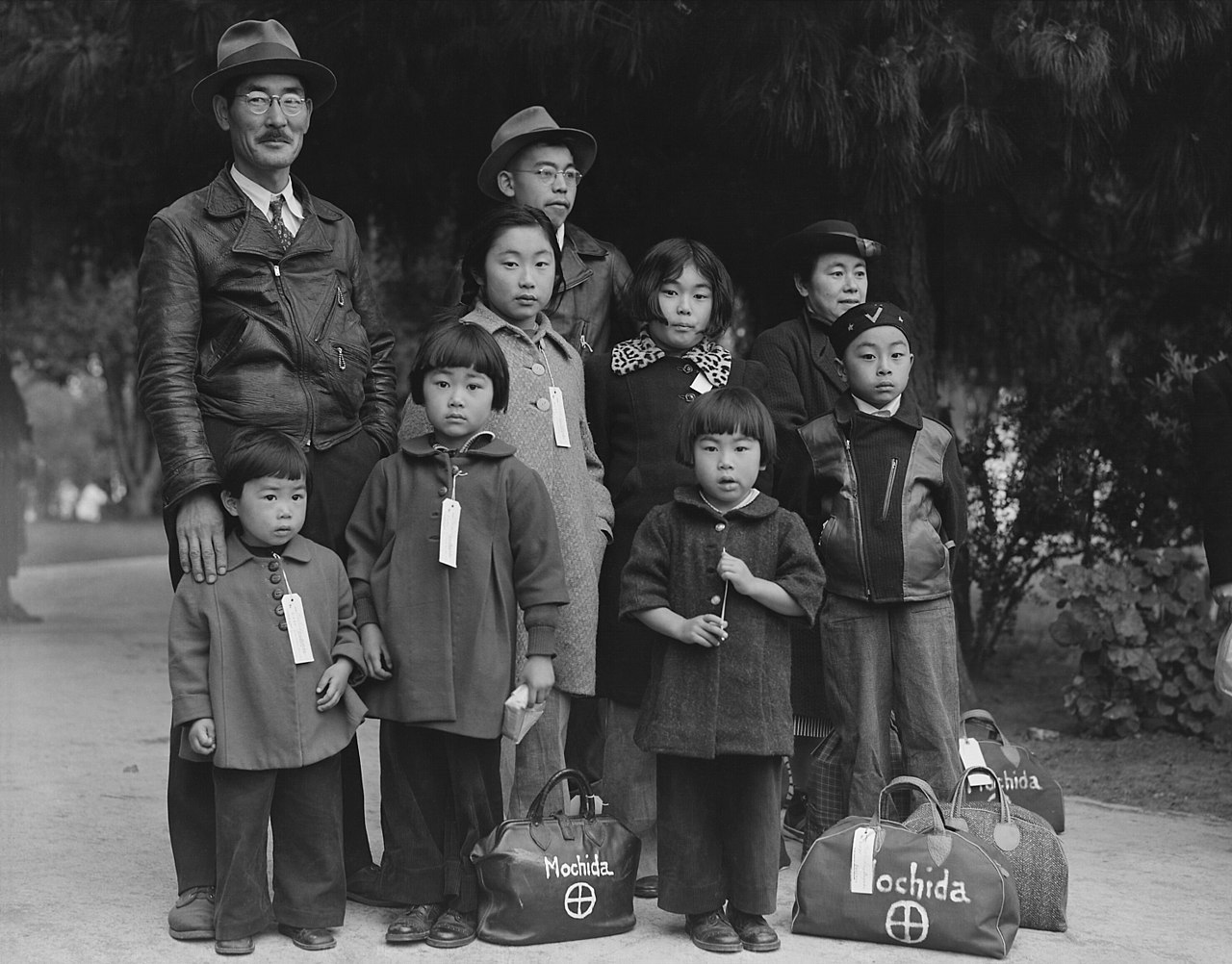 A student who learns the reality of America--who learns about Jefferson's slaves, and about massacres like Tulsa, and about Japanese-American internment and the brilliance of Thurgood Marshall and the courage of Rosa Parks--is in a far better position to make a better future America than a student who, as a result of petty fears of "indoctrination," knows no real history but instead has only been taught to absorb propaganda and bromides bereft of any critical engagement with the past.

But to frame it this way is to lay bare what anti-"CRT" conservatives really do want, and don't want. Ultimately they don't want critical thinkers or citizens who know the real story of America. They want people who are ignorant of that history, because they assume ignorant people are more likely to vote for politicians that conservatives think they like, the delusional Donald J. Trump being the paradigm example.

As a history teacher, I defy these cynical attempts to game the future by controlling the past. Conservative attacks on "CRT" are laughable and bankrupt, cynical and idiotic, mean-spirited and poorly-conceived. No history teacher should take them seriously. Let's teach our children, and conservatives' children, to be unafraid of the past. Let us pay no attention to conservative fears about learning history. I'm too busy teaching history to worry what they think anyway.