The war that began our descent: The 1990 invasion of Kuwait. 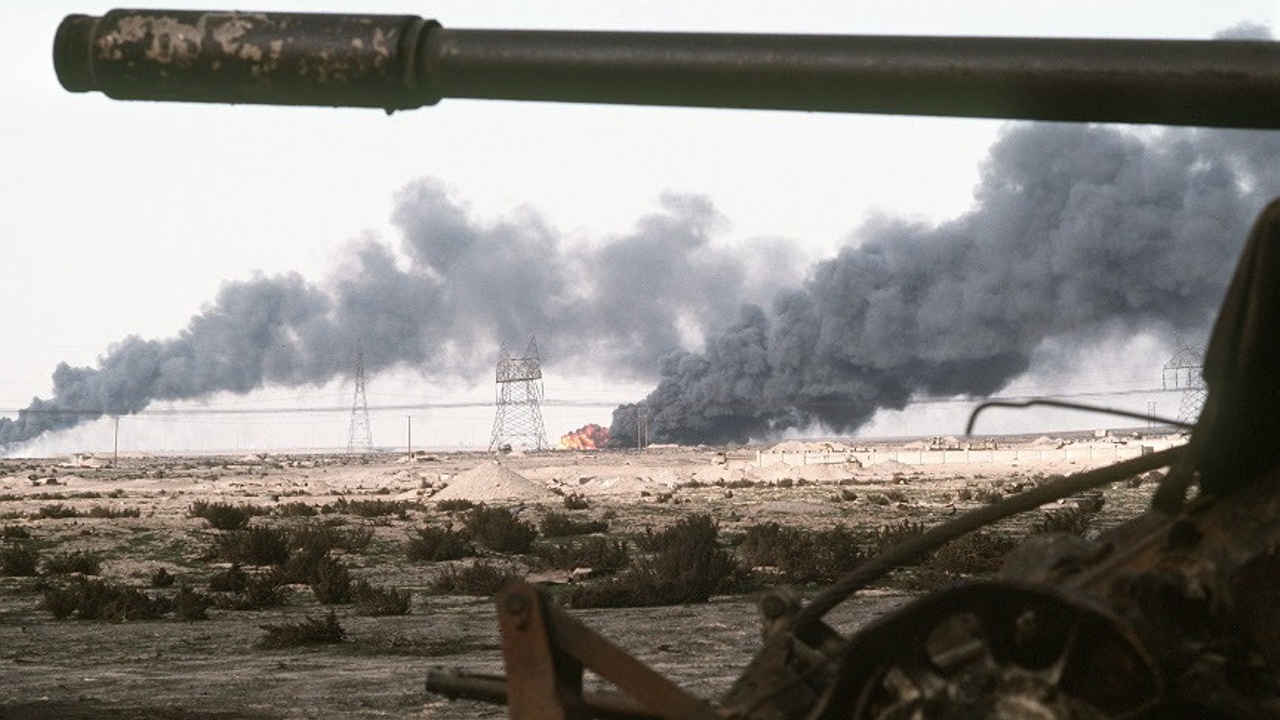 Thirty years ago today, on August 2, 1990, military units of Iraq's elite Republican Guard crossed the border between that country and its southern neighbor, Kuwait, in an audacious invasion that has been described as one of the most daring military moves of the 20th century--right up there with Hitler's attack on France in 1940 or Japan's raid on Pearl Harbor in December 1941. It's hard to believe it's been three decades since this event, which seemed so momentous at the time, but which today often gets lost or glossed-over when the recent history of the world is told. Insofar as Americans are concerned, the invasion is chiefly remembered for triggering the brief war in which U.S. forces, together with a multinational coalition, reversed the result of the invasion by attacking Iraqi dictator Saddam Hussein's forces in Kuwait in January and February 1991--the "First Gulf War," it's sometimes called. But in reality the 1990 events have much greater resonance than that. Indeed, Saddam's invasion of Kuwait arguably stands at the very center of recent world history, and it could even be called the beginning of the world's descent into the hell of chaos where we now dwell so uneasily. But you rarely hear people, even historians, talk about it like that.

In most of the West, the Kuwait invasion was the event that brought Saddam Hussein to people's general attention. In reality, though, by 1990 Saddam had already been the dictator of Iraq for 11 years, since he took over the Ba'ath Party in 1979, and at least to some degree in control since 1968 when the Ba'ath Party achieved power in Iraq. Saddam's rise and reign was closely tied to other events in the region. In fact the Iranian Revolution of 1979 indirectly brought Saddam to power, and then motivated much of his actions once he was in control of Iraq. The invasion of Kuwait hardly came out of a clear sky with little warning, as it was presented in the Western press, and it was not the random act of a megalomaniacal madman, as politicians, especially the first President Bush, painted it. The Kuwait move was part of a monstrous but more or less rational strategy by Saddam to prop up his own power in the Middle East and to make a bid for some sort of pan-Arab unity, though this backfired badly.

This haunting video was taken in the early days of the Iraqi occupation of Kuwait in August 1990. Many people still remember its horrors.

Boiled down to its essence, the problem was that Saddam's Iraq was broke in 1990, having just two years earlier come out of a grinding and horrific 8-year war with its neighbor Iran. With the exception of the two world wars, the Iran-Iraq War was the bloodiest conflict of the entire 20th century. To make matters worse for Iraq, toward the end of that war, in 1986, the world price of oil crashed to disastrous (for oil-producing countries) lows. The 1980s oil crash had significant implications for climate change, as economies retooled to replace revenue and companies sought to reorganize both extraction and refinement. For Saddam the problem was more immediate. He needed money; no one would lend Iraq a dime; and Kuwait, a very rich Gulf state that had not gone along with the plans of other Arab countries to try to raise the price of oil, was there for the taking. Saddam decided simply to loot Kuwait and take its wealth by force, and he dared the rest of the world to stop him.

Loot it he did. Kuwait and its people suffered horribly under the Iraqi invasion, with thousands killed, many "disappeared" under mysterious circumstances, people tortured and cultural treasures looted or destroyed. The consequences for Kuwait were more than physical or economic. After the country's 1991 liberation, the restoration of the emirate government sparked a long, deep introspection in Kuwaiti society about democratic values, voting rights, the rights of women and many other issues. The West tried to forget about Kuwait after 1991, but a lot of what the modern Middle East is now has its roots in either the 1990 invasion or the aftermath of the 1991 war. 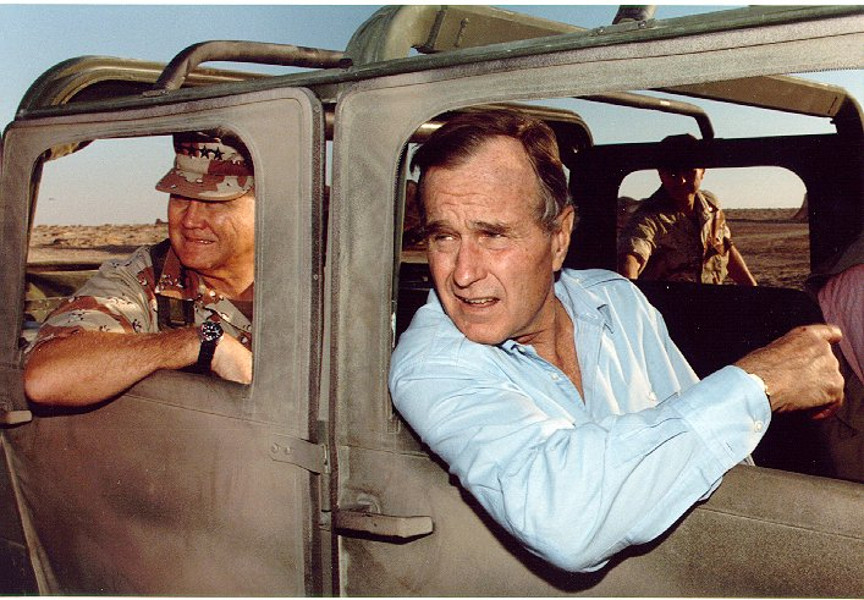 The first President Bush, seen here touring the U.S. staging area, thought the Gulf War was his greatest triumph--but he was unseated as U.S. President less than two years later. The cause of his downfall is complex.

You could argue that 9/11 has its roots in the 1990 invasion. In early August 1990, Saudi Arabia, fearful that it was next on Iraq's hit list, requested the presence of American military forces to deter an invasion. This deployment was the genesis of the army that ultimately went to war in January 1991, but the presence of "infidels" on the holy soil of the country containing Mecca and Medina was one of the principal grievances of Al Qaeda terrorist chieftain Osama bin Laden. The fact that American troops continued to be stationed in Saudi Arabia after the war was over was a constant grievance in the Islamic world. Addressing this grievance was one of bin Laden's stated reasons for striking the United States so savagely in September 2001. That event, of course, led to the U.S. invasions of Afghanistan in 2001 and Iraq in 2003; the Iraq War, a deep trauma in American history, was mainly the reason why Barack Obama came to power in 2008; the counterreaction to Obama's legacy is called Donald Trump.

Had it not been for the invasion of Kuwait on August 2, 1990, would Bill Clinton ever have become President--or would his wife have ever gotten within a stone's throw (or a Russian hack) of the White House? Without the invasion and the subsequent Persian Gulf War committing Western powers to use force to protect oil supplies, might efforts to fight climate change have gotten greater traction much earlier? These are unanswerable questions, but fascinating to ponder. 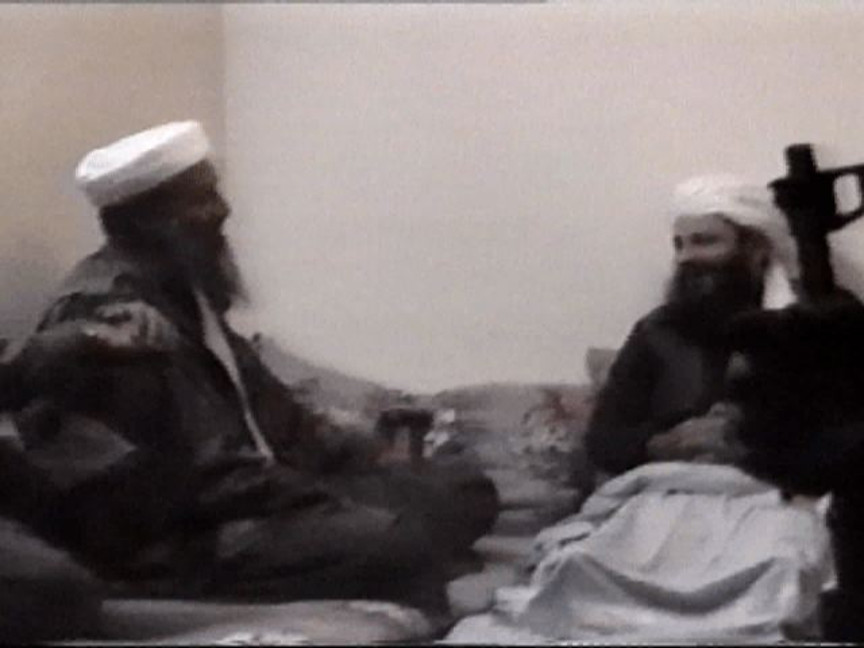 Osama bin Laden and an Al Qaeda lieutenant discuss their attack on America. Did the 1990 invasion of Kuwait ultimately lead to September 11? Historically, you can make a case that it did.

Events in history are connected through numerous threads--not just chains of events, but economic and cultural ties, attitudes, the lives of people and nations, and memory. The dramatic events of August 1990 have faded into the past, but they stand uniquely tall in the stature of recent events. Few events of our lifetimes have been quite so tragic--and so momentous.

If you're not signed up for my Meet Someone From History email list, you should be!

All images in this article are in the public domain. I am not the uploader of the YouTube clip embedded here.