"Michelle Remembers," SRA and the Historical Roots of QAnon. 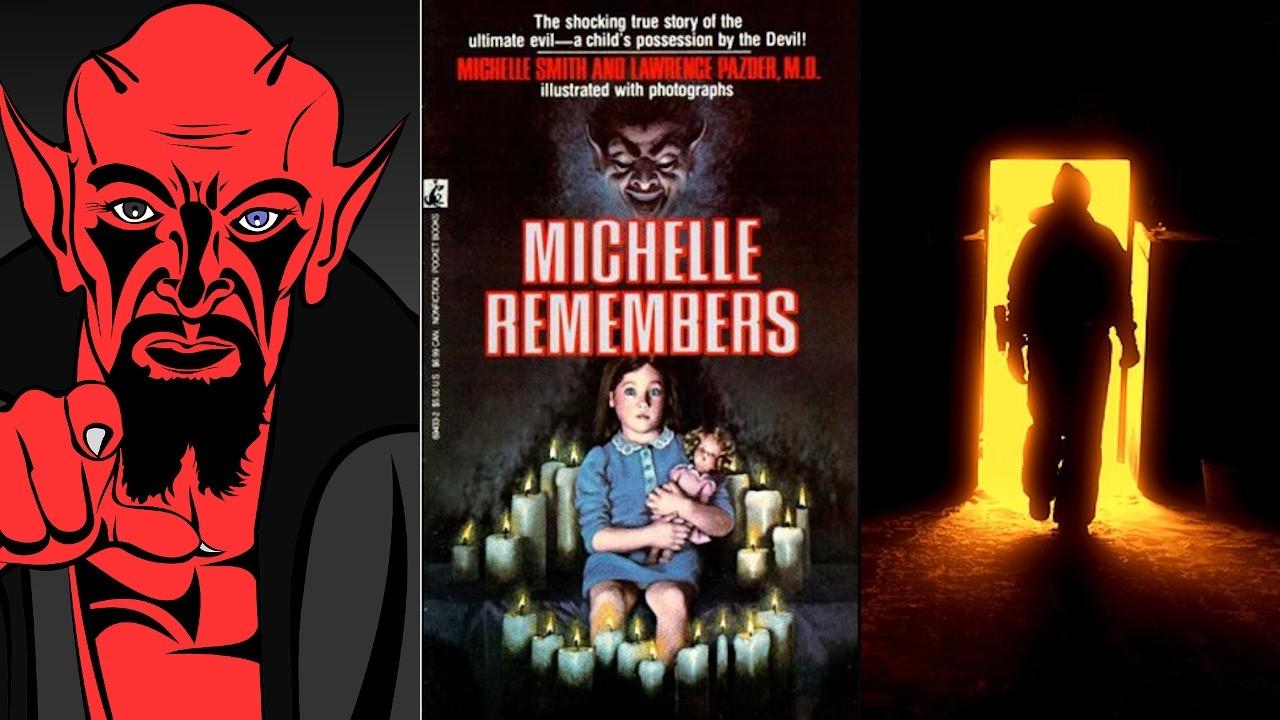 Right now, in the late summer of 2020, a significant number of people believe that cabals of Satanists are kidnapping children in America, trafficking them into sex cults and abusing them in bizarre and evil occult rituals. The phenomenon is known as "QAnon," and it's mostly a political movement allied with extreme fringe right-wing politics, bubbling up out of the conspiracy-soaked fever swamps of the Internet. But if you were a kid in suburban America in the '80s, as I was, this delusion should sound very familiar to you. Stripped of its radical politics, QAnon, to the extent it's even coherent, is remarkably similar to what was known as "SRA" (Satanic Ritual Abuse), a nebulous chimera that wreaked havoc in America 30 to 40 years ago.

It sounds incredibly far-fetched--and it is--but millions of otherwise rational parents were terrified that their kids might be targeted by pedophilic Satan worshipers who supposedly had some kind of organized network in North America. SRA fears were so prevalent that they were the subject of various mainstream media reports on shows like 20/20 and Oprah Winfrey. There are few starker examples of a "moral panic" in modern history. 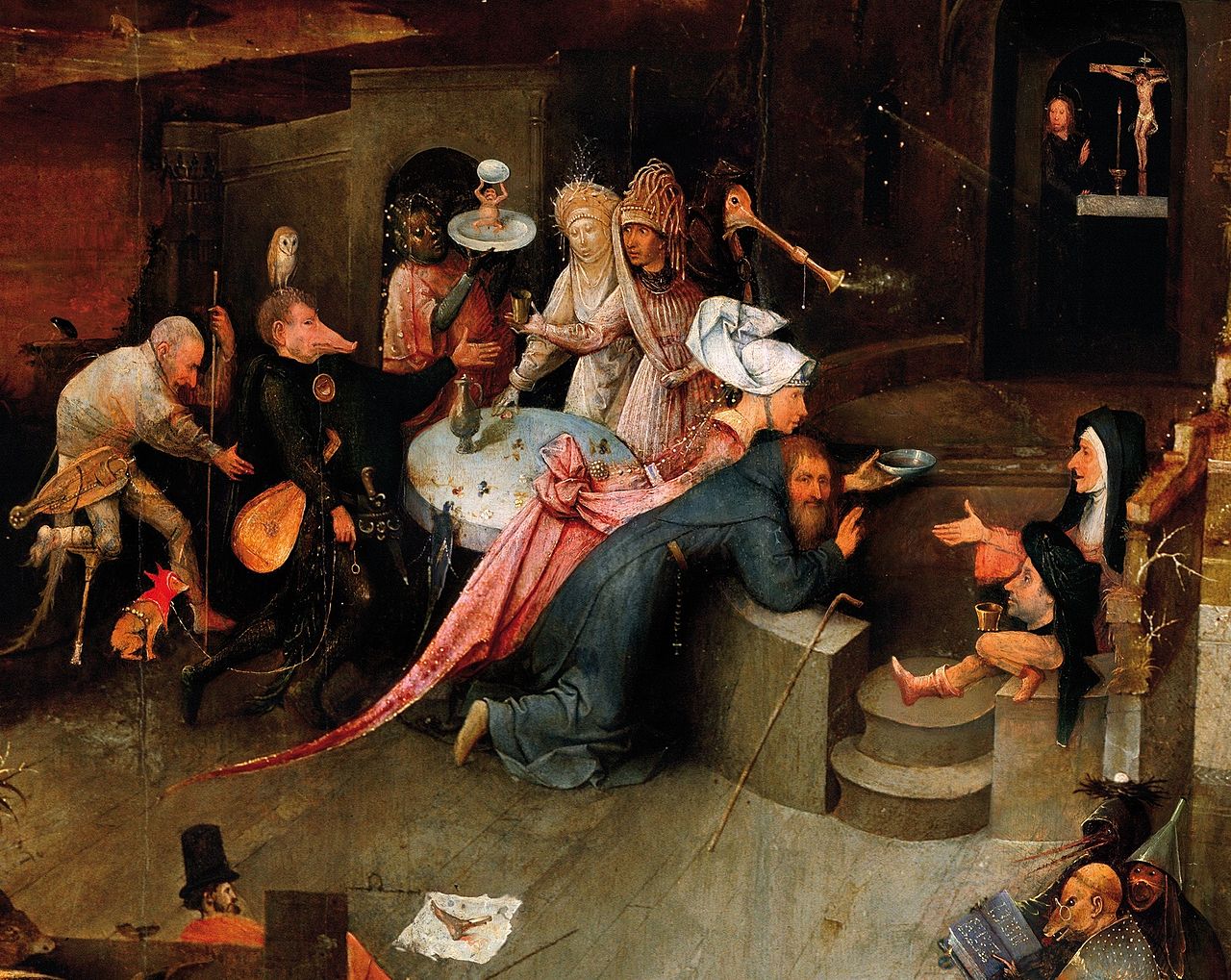 Satanic rituals have long been a boogeyman in Western culture. This late 15th century painting by Hieronymous Bosch depicts a "Black Mass," one of the supposed Satanic rituals described in Michelle Remembers and other modern claims of Satanic abuse.

The entire SRA scare can be traced to a single source: a book called Michelle Remembers, written by Lawrence Pazder and published in November 1980. The book was billed as a true story. In the book, Pazder, a psychiatrist from Victoria, BC, Canada, documented his therapy with an adult patient named Michelle Smith, who while under his care recovered repressed memories of horrifying sexual abuse in her childhood in Victoria in the 1950s. Under hypnosis Michelle recalled strange rituals, many occurring in a basement room and in a cemetery, involving knives, masochism, rape and murder. At one point Michelle said she was bundled into a car with the corpse of a dead victim of the Satanists, and the car was purposely crashed. She also claimed she endured 81 straight days of abuse in a marathon mega-ritual in which the cultists summoned Satan himself. Michelle fingered her mother as one of the instigators of this abuse. The mother, Victoria Proby, died in 1964.

Michelle Remembers made a huge splash when it appeared on the literary scene in 1980. By now Pazder was married to Michelle Smith, and the husband-and-wife team went on a publicity tour to promote the book which was very successful, garnering articles in mass media publications like the National Enquirer. The allegations of an organized network of Satanists throughout North America, who abducted kids and did these horrible things to them, were too explosive to tamp down. Pazder began consulting on other cases where people came forward and claimed to remember sex abuse from their childhoods. Suddenly it seemed there was a wealth of corroborating evidence to prove that indeed organized rings of Satanists had been running around the U.S. and Canada for decades and committing horrible acts with children. 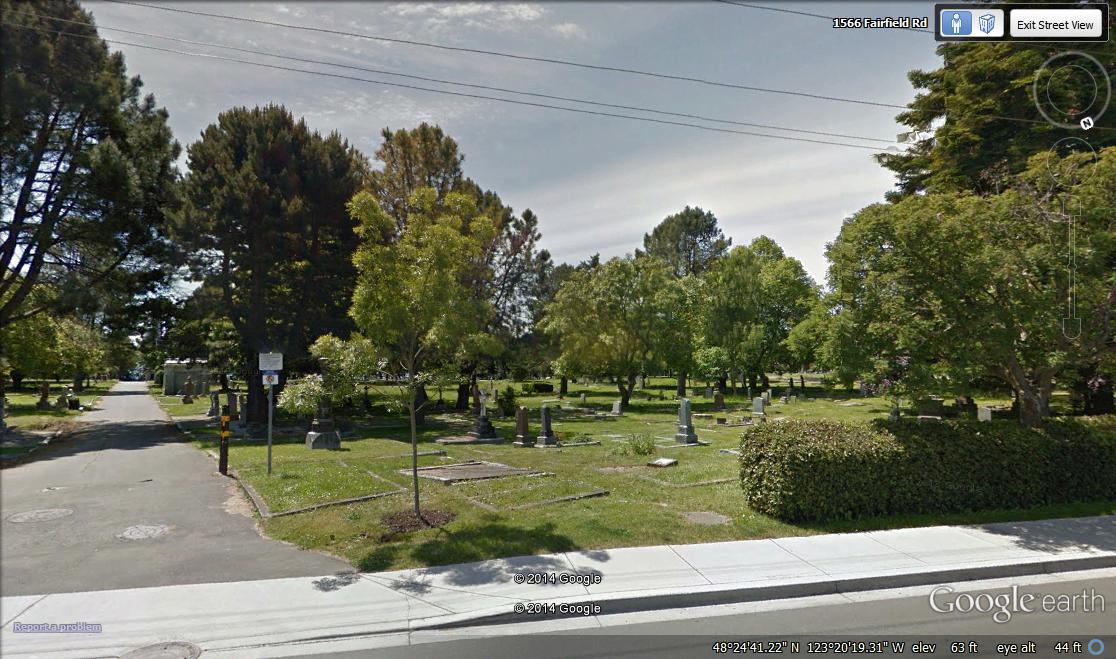 Ross Bay Cemetery, in Victoria, BC, was identified in Michelle Remembers as one of the places where the abuse took place. However, the descriptions of what happened there make no sense in light of the real place, which is shown here on Google Earth.

At the same time, however, a second story was developing. Even before the book came out an investigative reporter in Canada went to Victoria to interview Michelle's surviving family and friends and investigate the now 25-year-old allegations. Michelle's father, who was still alive, refuted every allegation made against his late wife. Curiously the book contained no reference to Michelle's siblings; why weren't they also targets of the cult? There was very little corroborating evidence for the abuse and no witnesses directly supported her story. Some news outfits were squeamish at reporting the Michelle Remembers claims as truth.

Many, however, did--and with tragic consequences. By 1983 the country was awash in SRA allegations. The most awful of them came from a preschool in southern California, the family-run McMartin Preschool. One woman claimed, upon pretty flimsy evidence, that her young son was abused by the woman's ex-husband, a teacher at McMartin. The woman was later found to have been insane at the time she made the allegation. Authorities investigated and called in social workers to interview the school's students. Ultimately 360 of them claimed they had been abused. However, the investigators' methods were quite sketchy; the claims seem to have been coaxed out of very young children through extremely leading questions and spurious interpretations of sometimes incoherent testimony. One child identified a photograph of actor Chuck Norris as one of his abusers; Norris never had any conceivable connection with the case. Other children talked about underground tunnels under the school and watching the teachers fly around the room--obviously impossible. Clearly something was wrong, but the prosecution forged ahead anyway.

Seven people associated with McMartin Preschool were charged with child abuse. An excruciatingly long investigation period led up to the trial; during this period one district attorney called the state's case "incredibly weak" and dropped charges against five of the seven defendants. The case against the remaining two went ahead. Lawrence Pazder and Michelle Smith were consultants to the accusing children's parents. By the time the incredibly long and expensive trial ended in 1990 the number of victims whose claims were asserted had dwindled to only 48. The jury acquitted one of the defendants, Peggy McMartin Buckey, and was unable to reach a verdict regarding the other, Ray Buckey; eleven of thirteen jurors voted to acquit him but two were intransigent. The media focused on these two jurors. Eventually the state gave up trying to convict Buckey who had already spent five years in prison despite not being convicted of anything. The trial cost $15 million--still the most expensive state criminal trial ever--and ruined countless lives. In the years after the trial, the children accusers grew up and many stated plainly that their testimony had been coerced, that they knew it was wrong at the time but wanted to please their parents and the investigators.

Some of the "rituals" described in Michelle Remembers may have been inspired by the popular 1968 horror film Rosemary's Baby, which was a cultural sensation during the '60s and '70s.

Shockingly, even as the trial was nearing its end, the news media was still treating Michelle Remembers as fact. Oprah Winfrey had Pazder and Smith on her show in 1989 and repeated the allegations uncritically. (Oprah would later get burned by another fake memoir, James Frey's infamous A Million Little Pieces). In 1990, as the McMartin disaster was ending, another round of press investigations probed into the book, demolishing its claims. The car crash Michelle claimed to have been involved in was never recorded by the papers or the police of Victoria. Furthermore, someone pulled Michelle's school records from 1955 and found she was attending school during the period of the alleged 81-day ritual marathon. No evidence has ever come to light suggesting the existence of a vast Satanic conspiracy to abuse children. Lawrence Pazder responded to these revelations by saying that whatever really happened was less important than what Michelle Smith believed happened--not a very ringing defense of what was supposed to be a memoir. He died in 2004.

Despite being widely discredited--by the FBI, among other agencies, in a damning 1992 report--there are a surprising number of believers in the SRA delusion still around today. A version of this article appeared on the previous incarnation of this blog back in 2014, and I received more email about it, almost all of it sharply negative, than about any other subject I've written about with the exception of the Oak Island scam. All of the critics had swallowed the basic assumptions of SRA hook, line and sinker. It's a prime example of a pseudohistorical narrative: a false but compelling vision of past events, seductive because of its simplicity and moral clarity, but which obscures the real issues behind it. 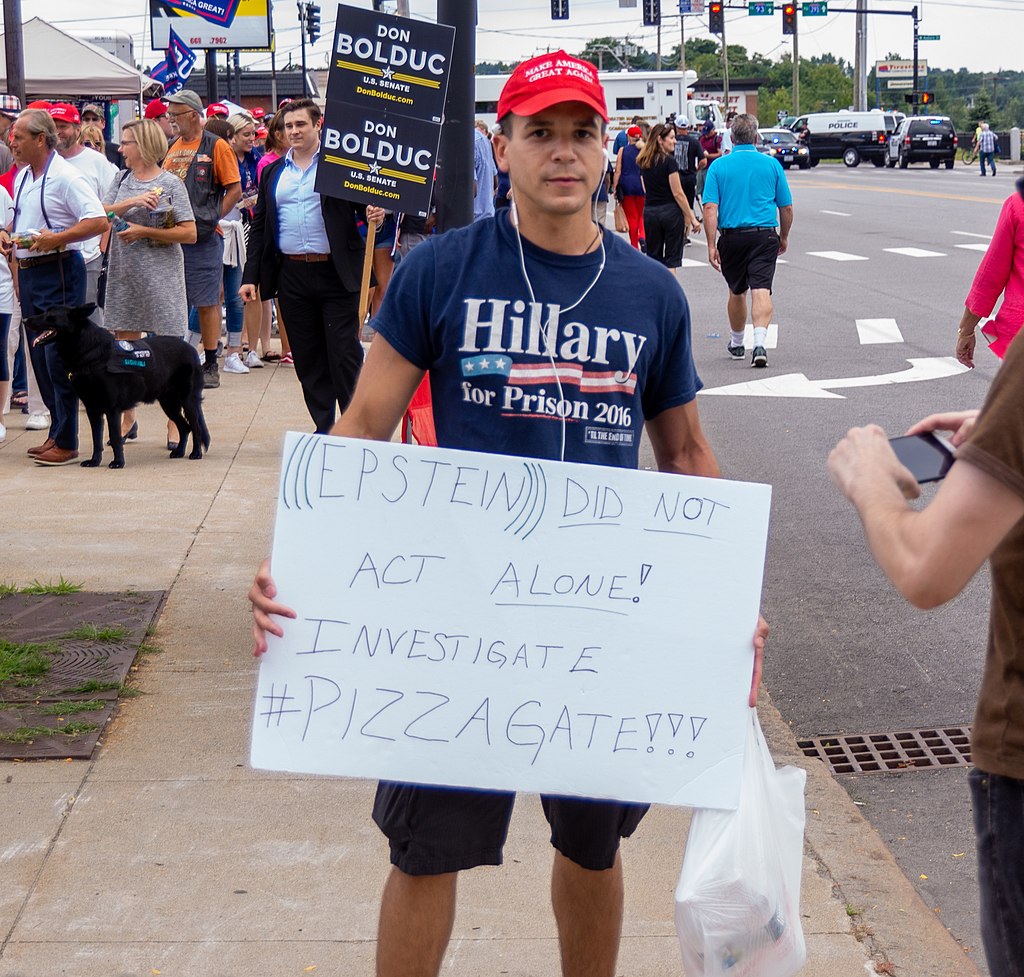 In its 2010s incarnation, the old "SRA" delusion has become weaponized, as American conservatives have co-opted stories of ritual sex trafficking into politically-charged conspiracy theories like "Pizzagate." The ((( triple parentheses ))) is an anti-Semitic dog whistle developed in the Neo-Nazi underground.

The sexual trafficking of children, sometimes by powerful people like the late Jeffrey Epstein, is a real thing, and it does happen in the real world. But conspiracy delusions like SRA in the 1980s and QAnon in 2020 aren't really about what happens in the real world. They are reactions to social forces seen by certain elements of society as threatening. As Ari Breland explained in Mother Jones magazine last year, these conspiracy theories seek to substitute easily vilified, made-up demons, like Satanic pedophiles, for largely politically and socially-based angst at progressive changes in society. In the 1980s SRA was a backlash against feminism and the changing roles of women. It was never really about Satanic pedophiles. It was about what was perceived by some as the breakdown of traditional family structures.

History, then, gives us another insightful glimpse at something that's happening in our present. As the "QAnon" delusion spreads through society, poisoning its believers with bizarre fabrications largely aimed at political ends, the progress of this cognitive virus is very much following the pattern of the SRA poison in the 1980s. QAnon will probably destroy countless lives, just as SRA did 35 years ago. The whole sad saga of Michelle Remembers demonstrates the old adage that a lie can circle the world while the truth is still putting its shoes on.

The cover of Michelle Remembers is copyright (C) 1980 presumably by Pocket Books, the publisher. I believe my inclusion of it here constitutes fair use.  The other images in the header are public domain. The photo of the "Pizzagate" conspiracy theorist is by Flickr user Marc Nozell, used under Creative Commons 2.0 license.