"The Man Who Saw Tomorrow": the movie that ruined Nostradamus. 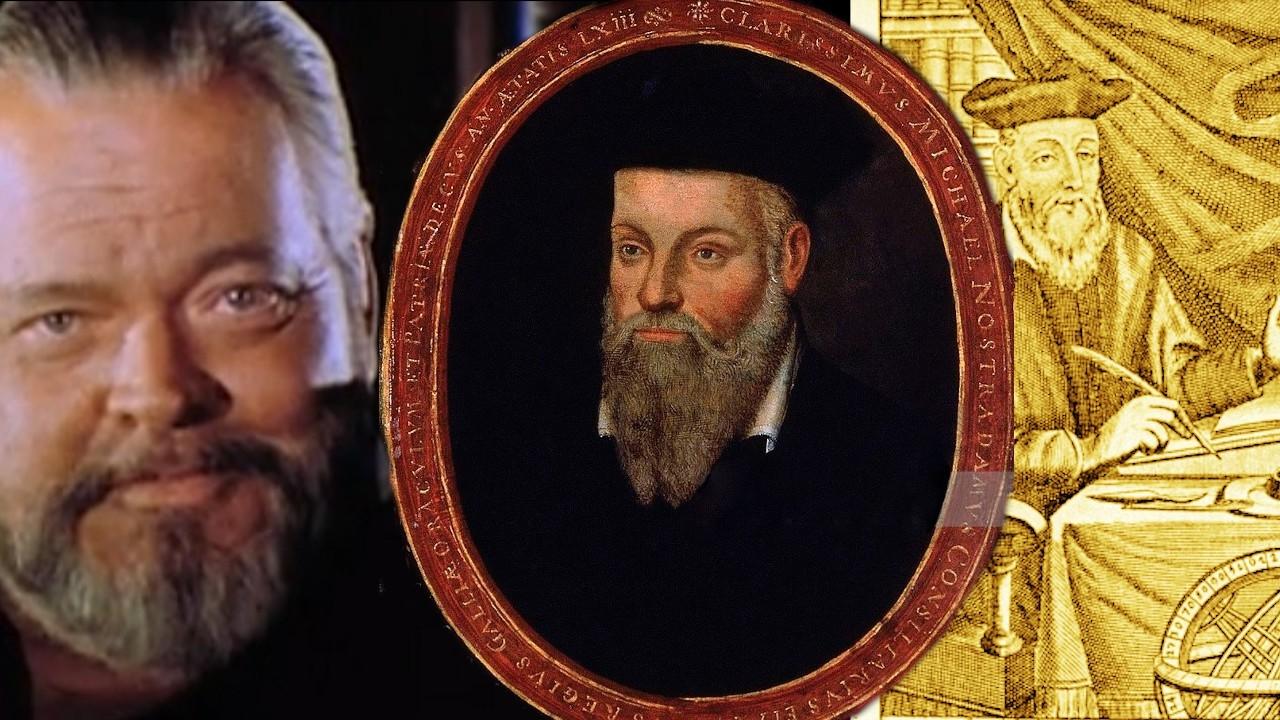 Have you heard of a "seer" or "prophet" named Nostradamus? Chances are pretty good that you have. What do you know about him? If you're like most people, probably not much more than this: he lived centuries ago and supposedly predicted future historical events with remarkable accuracy. Do you remember where you first heard about him? Let me guess...you saw (or heard about) a movie about him, narrated by Orson Welles. Amirite?

The movie was called The Man Who Saw Tomorrow, and it made a big splash when it was released in January 1981. The early 1980s was a heyday of shlocky New Age pop culture, often colored with religious or eschatological undertones--Hal Lindsey's trashy book The Late, Great, Planet Earth is part of this genre, and strongly influenced the whole Left Behind book series of the 2000s. The narration of Orson Welles, whose 1985 death bequeathed the title of the English speaking world's most epic-sounding voice to its next guardian Christopher Lee (also sadly deceased), lent gravitas to the production.

If you've seen the movie or heard anything word-of-mouth about it, you know at least some of its contents. Supposedly Nostradamus correctly predicted the coming of World War II, even getting the name of the dictator who started it almost right ("Hister" instead of "Hitler"). He also supposedly predicted the JFK assassination, and, one item that revived the fortunes of the film 20 years after its release, supposedly predicted an attack on New York City by an Islamic fundamentalist which some have interpreted as referring to the September 11 attacks. 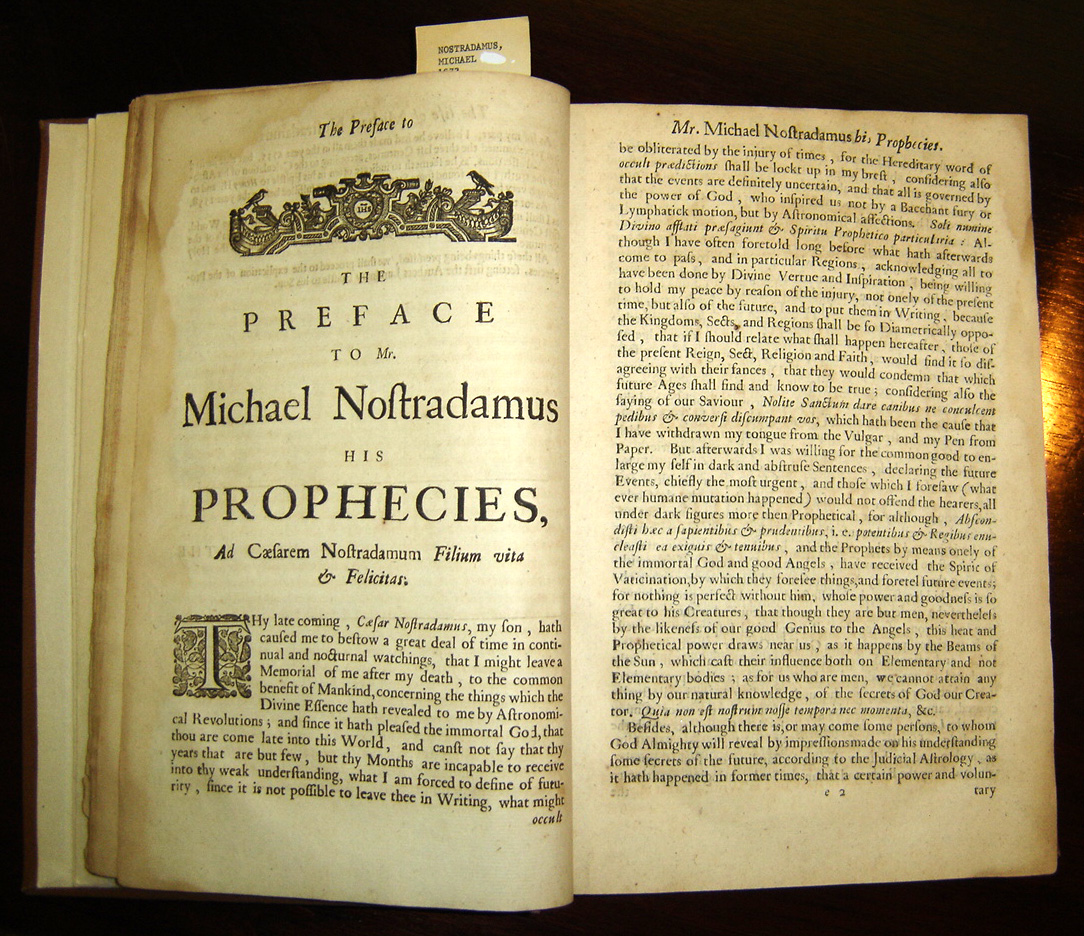 Here is a 1672 edition of Nostradamus's "Prophecies," an antique book held by the University of Texas.

There's just one problem with the film, and it's the exact same problem that surrounds almost any interpretation of Nostradamus: it's utter hogwash. To the extent Nostradamus "predicted" anything, his "predictions" are nowhere near this accurate.

Michel de Nostredame was a French apothecary--essentially, a pharmacist, though he attempted (unsuccessfully) to learn medical training. Born in Provence, France in 1503, he wandered France and Italy practicing his trade and studying for degrees--which he did not compete--until, attracted by astronomy and the occult, he began writing prophetic verse in 1550. He Latinized his name to "Nostradamus" and wrote numerous almanacs, medical handbooks, and the works that made him famous in our own day, The Prophecies. He did believe he could see the future, and while some denounced him as a fraud, a charlatan or insane, others believed he was prescient. He died in Provence in 1566.

Despite what The Man Who Saw Tomorrow would have you believe, the vast majority of Nostradamus's "predictions" are utterly incomprehensible--and they were even in his own time. Part of the problem is that they're written in not one but four languages: French, Latin, Greek and Italian. The words of the "quatrains" shift languages without warning, and even individual words themselves are scrambled up into anagrams. Nostradamus loved codes and wordplay, and some argue he engaged in all this obfuscation to confuse the Inquisition who might have persecuted him for heresy.

To make matters worse, all of this mumbo-jumbo is written in a very arcane style of flowery medieval verse, employing metaphors whose meanings are subject to any number of interpretations. It's not even clear which century each quatrain refers to--the numbering system he used for each "century" does not correspond to real calendar years, and people who have cherry-picked his "predictions" have dated centuries only by shoe-horning what they think are accurate predictions into a particular time frame (i.e., "Oh, that verse could refer to John F. Kennedy, so this chapter must be about the 20th century").

Here is a 1986 promo clip for the deeply ridiculous film The Man Who Saw Tomorrow.

Basically, anyone who thinks they can get anything as specific as Hitler, JFK or 9/11 out of medieval poetry, written 500 years ago in four different languages through a mess of code, anagrams, metaphors and fake dates, is engaging in the same thing that someone who looks at a Rorschach test is doing--seeing what they want to see in a field of essentially random data.

Orson Welles himself thought The Man Who Saw Tomorrow was rubbish. On a television talk show in 1982, he said that anyone trying to read specific "predictions" out of Nostradamus's gibberish was like a person trying to predict the future by reading a telephone book. Welles was desperate for money in the early 80s and basically grabbed any work he could find, especially voice-overs.

Nostradamus is a fascinating and bizarre figure. The meaning of his "prophecies" are totally unclear, but what's most fascinating about him is how people, decade after decade, century after century, continue to try to find accuracy in his strange writings. Fundamentalist Christians tend to be especially incensed by pointing out the facts about Nostradamus's life and predictions; this may be because they see his supposed predictions as validating an "end times" worldfview.

Unfortunately, The Man Who Saw Tomorrow has come to dominate how Nostradamus is transmitted into popular culture, at least since 1981 and probably for a few more years to come. That's really too bad, because it's not a very good movie. But I suppose an accurate movie about Nostradamus wouldn't be half as interesting, or as profitable. After all, who wants to see a movie about a prognosticator who's always wrong?

The images in this article are, to my knowledge, public domain.