Pan-American World Airways: the rise and fall of a 20th century cultural icon. 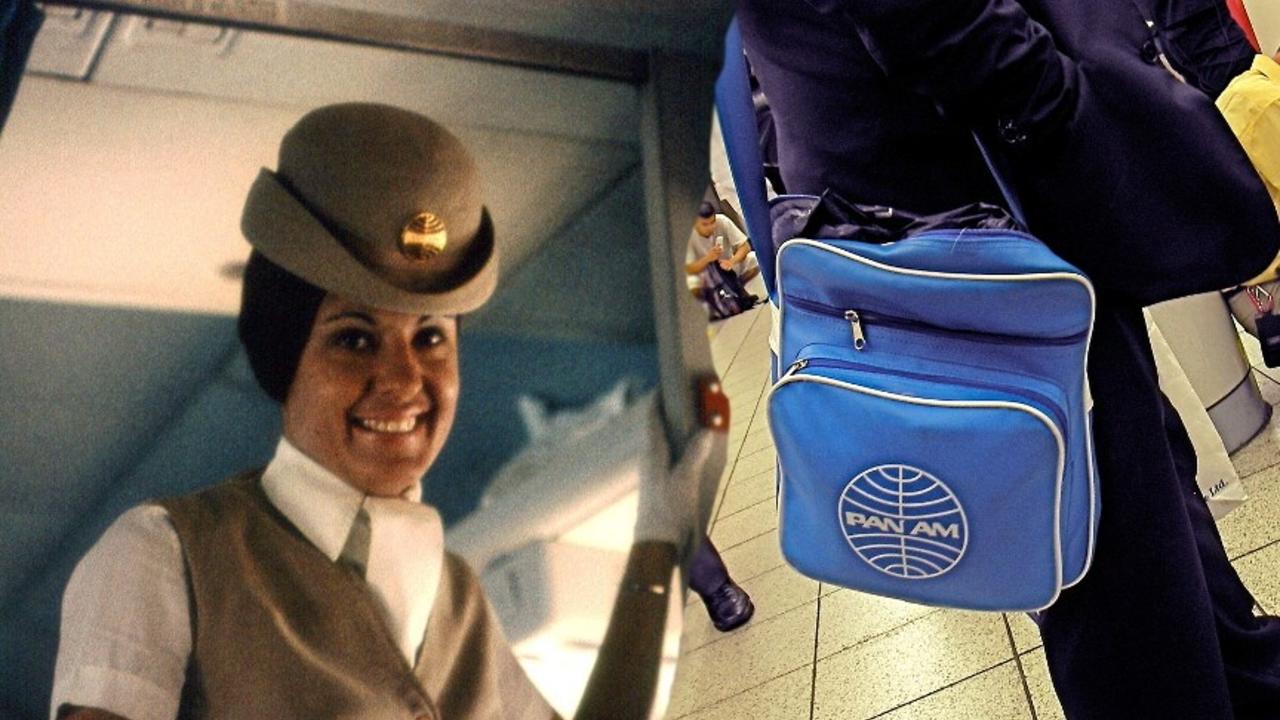 Seventy-three years ago, on January 6, 1947, Pan-American World Airways offered its very first around-the-world airline ticket. In that heady time just after World War II you could fly on a Pan-Am plane from New York to your choice of London, Lisbon, Buenos Aires, or start your journey going west to San Francisco or Los Angeles, connecting to the Pacific via Honolulu. That it was even possible to offer an around-the-world ticket--and especially in the age before jets--was a testament to how far, how fast and how broad the reach of Pan Am, then America's premier airline, had become. The company was then only 20 years old. It was still under the control of its founder and first CEO, Juan Trippe, recognized as a pioneer in the history of commercial aviation. By 1968, when Trippe retired, Pan-Am was easily the most visible airline in the world, and indeed a cultural icon of the golden age of air travel. That it completely ceased to exist barely a generation later is a testament to how the world changed. The story of the rise and fall of Pan-Am Airways is a story of the 20th century, and an era that we'll likely never see again.

While most people in the jetliner era thought of Pan-Am as truly a world-girding airline, it started as a project for which its name was literal and descriptive. In early 1927 Trippe banded together with Hap Arnold and Carl Spaatz, both later prominent in the air war in World War II, to form a company--then just a shell--ostensibly to offer flights from the U.S. to the Panama Canal Zone, as a counterbalance to a German air company that was reportedly planning to do the same thing. The impetus was not merely commercial but strategic: American aviation planners foresaw German airline service to the Canal Zone, which was then a U.S. colonial possession, as a prelude to possible German political influence in the area. To put its money where its mouth was, Trippe and the company chartered a small seaplane, secured landing rights in Havana and started hauling mail between Florida and Cuba with U.S. government sanction. The focus was not on the world, but on air links between the U.S. and Latin America. 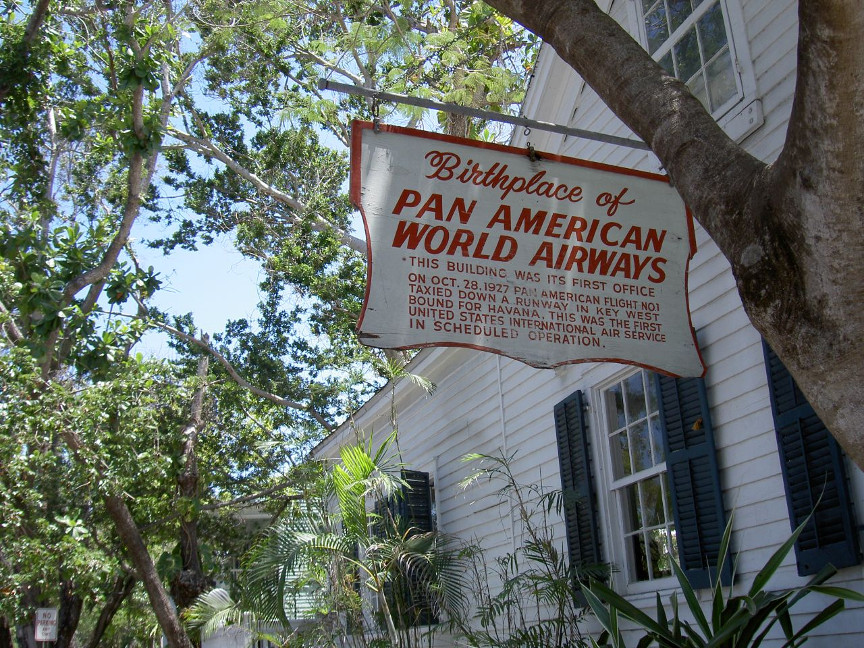 This building in Key West, Florida was the site of Pan-American Airways's first office at the time of its inaugural flight in 1927.

An airline with this rather modest beginning could only have exploded into a worldwide concern during the 1930s, the crucial decade for the development of air travel as an economic and cultural institution. After knitting together North and South America with various regularly scheduled air routes, many using planes like the Sikorsky S-38 Flying Boat, Trippe turned his attention to Europe, and Pan-Am began flying across the Atlantic in 1937. In a surprisingly short time Pan-Am "Clippers" became a reliable and trusted service on the all-important migration between New York and London as well as other Atlantic ports like Lisbon. Trippe had by that time already begun conquering the Pacific by securing landing rights at various islands that would, in the war years to come, become associated with battles rather than airports: Pearl Harbor, Wake Island, Guam etc. Indeed, in the early years of World War II, before the United States was drawn into the conflict in December 1941, the Pan-Am Clipper was one of the few tenuous links between the U.S. and Europe available to civilians. Most of the Clippers, like millions of Americans, went into wartime service in 1942.

The war both made and broke Pan-Am. Jet technology, as well as the political and economic landscape that would make it possible for Pan-Am to rule the world's airways in the 1950s and especially 1960s, had their seeds in the war years and their immediate aftermath. But these developments were now suddenly available to potential competitors--commercial forces that Trippe had never had to deal with, at least not in the same way, in the halcyon 1930s. Howard Hughes's Trans-World Airlines (TWA) challenged Pan-Am's semi-official U.S. government monopoly over transcontinental air travel in 1947. Other carriers like Braniff and Northwest Orient started appearing on routes to South America and Asia. Trippe wasn't quite done yet as an air pioneer, however: he was the first to recognize the potential of jet airliners, ordering the very first Boeing 707s for commercial service in 1955. By 1960 a new fleet of jets including the DC-8 were proudly sporting the "blue meatball" logo that was now as recognizable as Coca-Cola. The same era saw the construction of the immense Pan-Am Building in New York City which gave the airline a geographic and architectural profile as well as a commercial and cultural one. 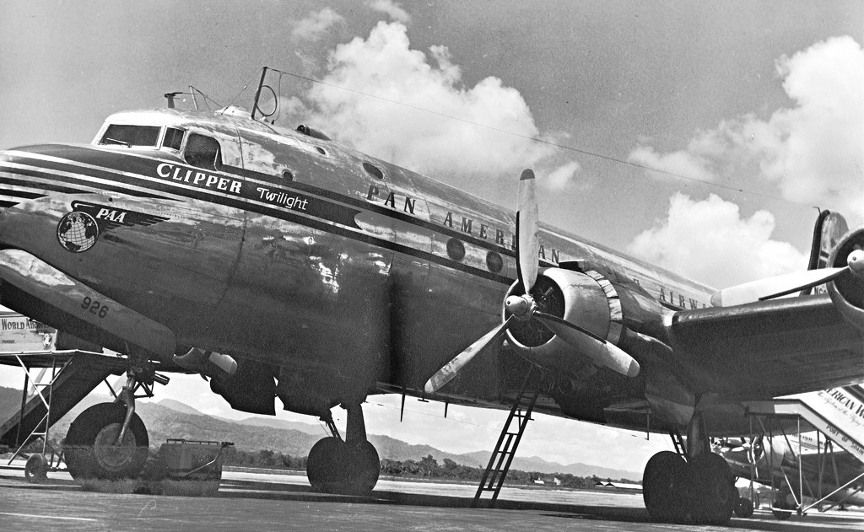 In the 1940s and '50s, Pan-Am "Clipper" planes knitted the world together in a spiderweb of air routes. Here's one Pan-Am DC-4 photographed in South America in the 1950s.

Indeed, the 1960s was the ascendant decade of Pan-Am, and of the cultural gestalt of American air travel. At the end of that decade you could board a Pan-Am DC-9 or 747 where fellow passengers wore suits, ties and evening dresses, have a real drink like a whiskey sour or an Irish coffee (in a real glass), and be served gourmet food by college-educated stewardesses chosen not only for their skill and demeanor but their physical attractiveness. Add to this the thrill of going to an exotic destination, like Manila, Bombay or Hong Kong, and you have a cultural imprint that resonates today. The look and mood, for example, of the 2000s-2010s TV series Mad Men, which takes place in the 1960s, owes a great deal to the cultural milieu of which Pan-Am and air travel were an integral part. Fifty years on, in a mean and frightening era where airline flights have become vectors for terrorism as well as cultural battlegrounds, the seeming innocence of the 1960s Pan-Am era is an attractive object of nostalgia.

Like just about everything else in American society, the decline of Pan-Am began in the 1970s. Economic changes and oil shocks, OPEC, the 1973 Arab oil embargo, terrorism and the badly misguided (and in fact utterly insane) policy of airline deregulation piled up a mountain of obstacles that the blue meatball just couldn't roll over. Pan-Am had a rebound of sorts at the end of the 1980s, but the seeds of its destruction had already been sown. The horrifying terrorist bombing of Pan-Am Flight 103 in December 1988 and the unrest in fuel prices following the 1990-91 Persian Gulf War, both events that grew out of political and economic stresses of the 1970s, were the causes-in-fact of Pan-Am's ultimate collapse. More than that, I think, the culture of air travel had changed dramatically. In 1991 no one was willing to pay for a friendly stewardess to serve them a mixed drink in a comfortable seat. You just wanted to get where you were going as fast as possible, damn the rest. 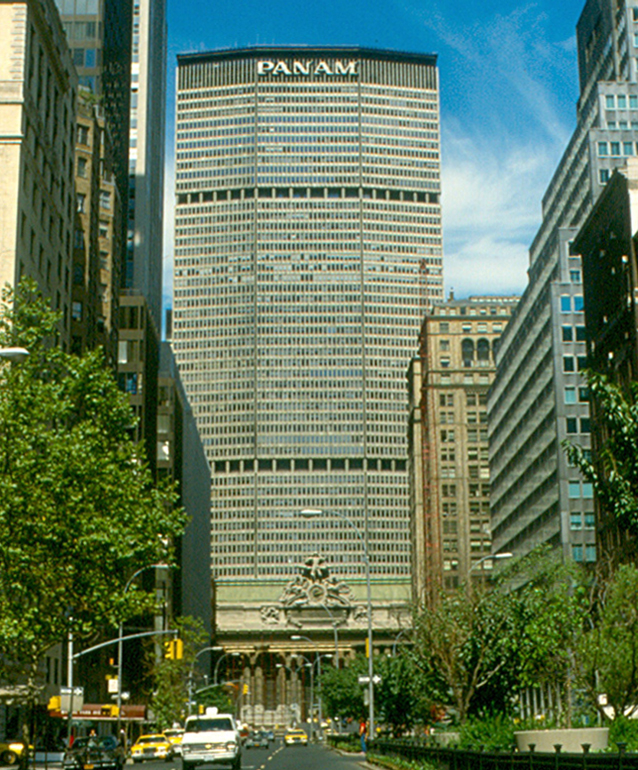 The Pan-Am Building, seen here in 1980, was a landmark of Fifth Avenue in Midtown Manhattan. It now has the much more boring name of the "Met Life Building."

The story of the bankruptcy of Pan-Am, which unfolded in agonizing slow-motion in the fall of 1991, is one of the most interesting and complicated economic stories I've ever encountered; I've long intended to do a blog article on that subject alone. Suffice it to say, after a round of intensive and ultimately fruitless deal-making where the airline sought emergency lifelines of hundreds of millions of dollars just to keep operating, the slow IV drip of money keeping it alive finally ran out on December 4, 1991. I remember when it happened. There was no orderly wrap-up of the airline's operations. The airline just...folded. Phones to corporate went mysteriously dead. When their shifts were over, employees walked off the job, to be replaced by no one, in some cases leaving passengers stranded at gates waiting for planes that would never arrive. By early 1992 the last traces of Pan-Am had virtually vanished, almost overnight. The name was sold to other companies that would attempt to revive it, but these attempts, none of which have been successful, had no connection to the real Pan-American airways.

As big and successful as it was in its heyday, Pan-Am was probably fated never to make it to the end of the 20th century. Its conception, cultural imprint and corporate mindset were all emblematic products of early- to mid-century conditions of aviation and the world economy. In a world that has now become globalized and is beginning to retreat from globalization, there's no place for the kind of service or profile that Pan-Am offered when it ruled the skies. It's now just another piece of aviation history--like the Concorde, a flashy and shiny toy that could never quite adapt to changing times.