If you were stranded: 5 examples of "desert islands" in the real world. 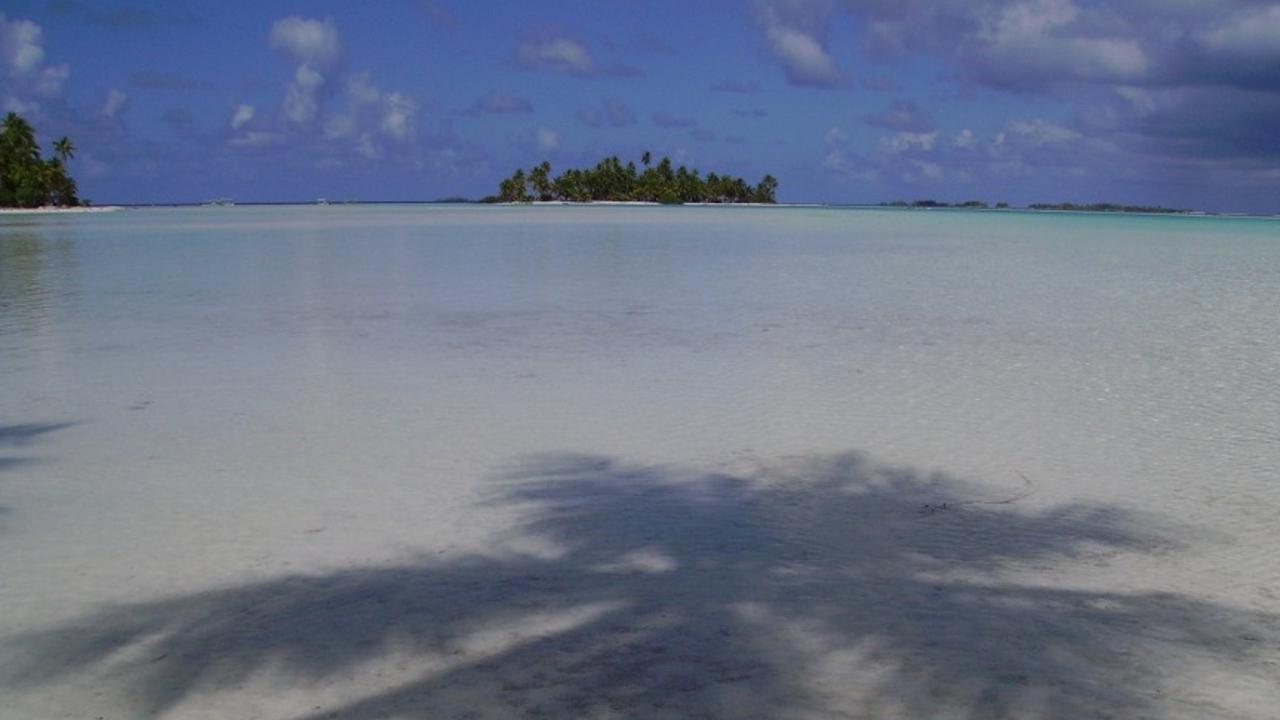 We've all heard the trope, and probably many of us have answered questions on social media that begin, "If you were stranded on a desert island...?" But aside from thinking about which five music albums or favorite foods we'd want with us, little thought is spent on the first part of the question. Outside of fiction and hypothetical scenarios, are there really "desert islands" in the world today? With some degrees of equivocation, which I'll get to, the answer is yes.

Like many others I've always had a fascination with truly remote areas of the world which are especially inaccessible, inhospitable or undesirable for some reason, or to which humans have never (or only rarely) gone. I have a similar fascination with the phenomenon of "castaway" or "desert island" narratives, where people are marooned on otherwise uninhabited islands and forced to survive, usually without any prior experience in extreme survival techniques. The preeminent paradigm of this kind of story in the English language is undoubtedly Daniel Defoe's novel Robinson Crusoe, first published in 1719. The same or similar story keeps getting told and retold in numerous forms, everything from William Golding's chilling Lord of the Flies (1954) or the popular Robert Zemeckis film Cast Away (2000) which starred Tom Hanks. Desert island stories have a unique hold on our imaginations.

As it turns out, there are many small islands dotting the oceans of the world where human beings currently do not live, usually for economic reasons: they're too expensive to get to and there's nothing worthwhile to do there. Yet even these have usually been used for some human activity--like collecting bat guano or establishing radar stations, especially among Pacific islands in World War II--so they probably wouldn't fit a purist's definition of "deserted" in the sense of a place that has never before been discovered or used by humans. I have scouted several examples of "desert islands" on Google, and decided to profile a few of them. For purposes of this article, I've focused on islands that are similar to what most people think of as a "desert island" in the traditional literary sense (whether or not the climate there is literally arid), which excludes, for instance, the thousands of uninhabited islands around Antarctica or in the Canadian Arctic. This list is by no means exhaustive; there are many more "desert islands" than I can list here. But here are a few. 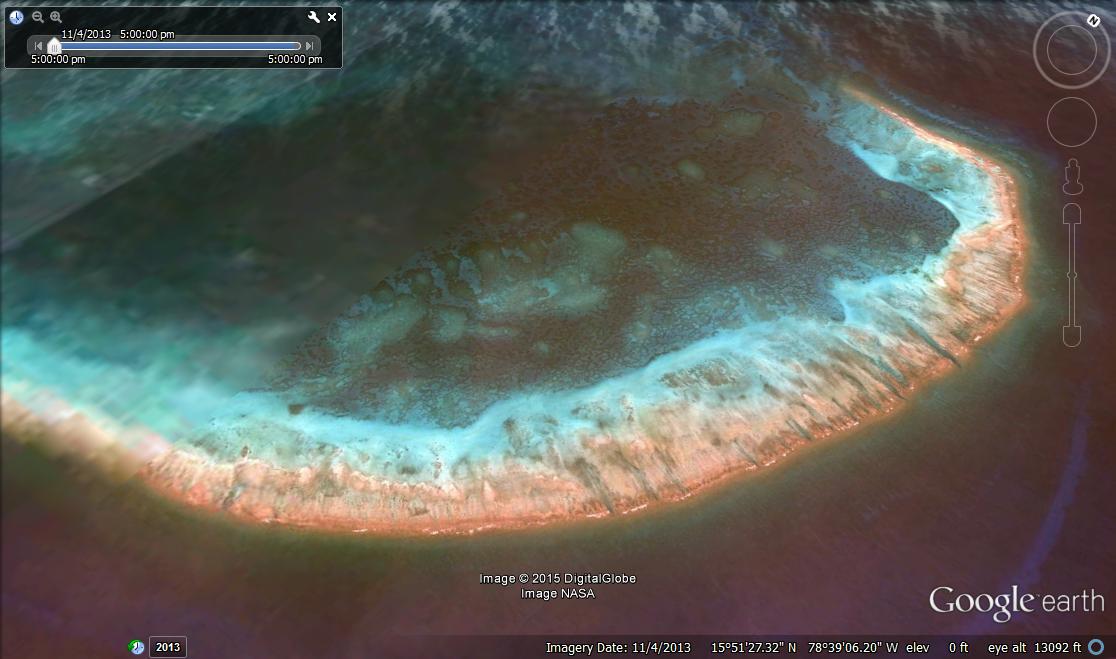 Bajo Nuevo Bank (Caribbean, off the coast of Nicaragua)

As an island, Bajo Nuevo Bank barely exists, and may not for much longer. Its highest elevation is 6.6 feet above sea level and I can't imagine the effects of climate change are going to leave much of it left in 100 years. There's really not much here. It's basically a beach with some coral and driftwood, although in 1982 the Colombian Navy set up an automatic light beacon for ocean navigation. Despite its desolation, however, Bajo Nuevo is the subject of a hot international dispute, having been claimed by no fewer than four countries: Colombia, Nicaragua, Jamaica and the United States. The American claim falls under the appetizingly-titled "Guano Islands Act." Of course we don't use bird guano for much anymore, and judging from the satellite photo, this desolate bit hardly looks like squabbling over. 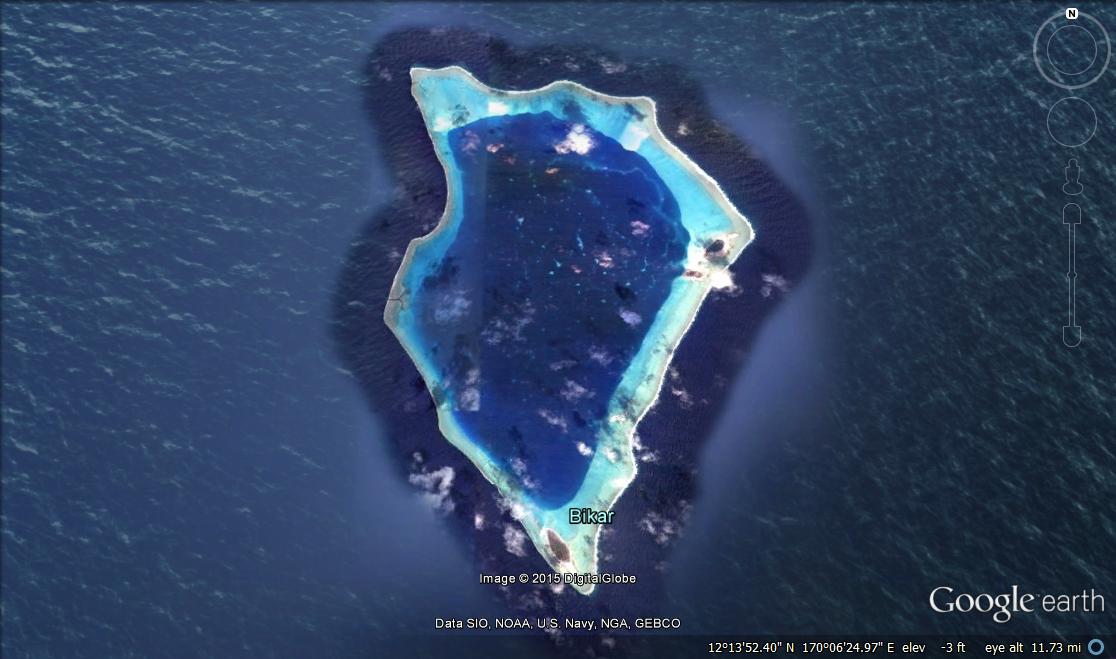 As desert islands go, they don't get much lonelier than Bikar Atoll. Part of the Ratak Chain, claimed by the tiny nation of the Marshall Islands, Bikar is a little ring of coral topped with sand. Its total land area is 0.19 of a square mile--about five million square feet. (The Pentagon, by contrast, is over 6 million square feet). It's home to various species of birds, as are many Pacific atolls, but the flora is pretty sparse; coconut trees planted by humans have only barely survived. Also like many Pacific islands, Bikar has a serious problem with rats. I'm not sure what they find to eat there, but whatever. This is one desert island that would be hell to be stranded on: death by boredom seems as big a threat as the elements. Oh, did I mention it was irradiated by U.S. nuclear testing in the 1950s? Even without that, it's easy to see why no one would want to live here. 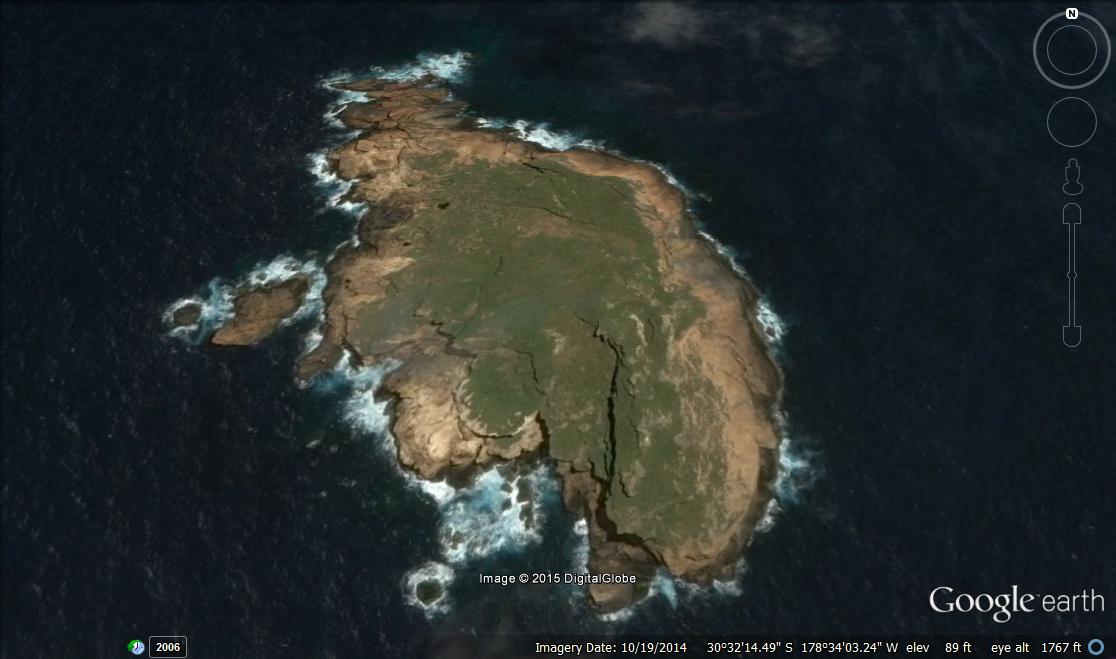 Cheeseman Island (off the coast of New Zealand)

This unusually-named island is fairly forbidding, made so mostly by its geography: it's a rocky plateau jutting up out of the sea with sheer cliffs on either side, which means the only beachcombing you're going to do on Cheeseman Island is with pitons and a safety line. Aside from birds and vegetation living on the flat top, there's nothing here. This would be a difficult place to be stranded due to the topography unless you could somehow make it up one of the cliffs. Interestingly, Cheeseman has a twin, the equally forbidding Curtis Island, across a channel that would be difficult to swim--assuming anyone would want to. 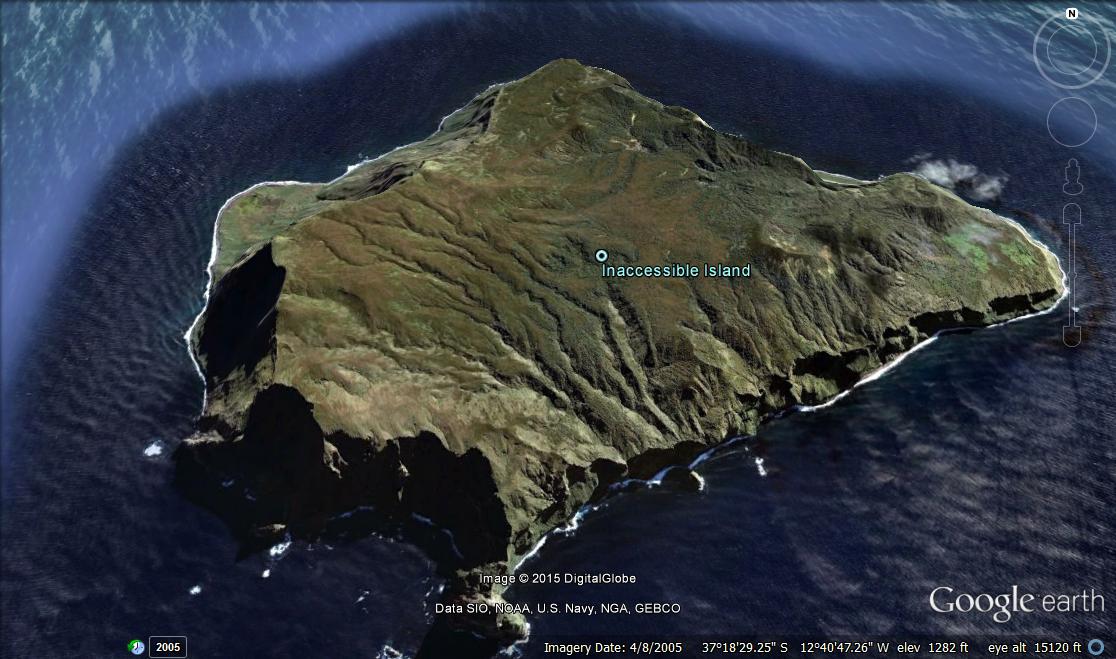 The name of this place is the epitome of truth in advertising. This rocky dot in the middle of the South Atlantic is mostly volcanic in nature, and lies squarely on the sea (and air) route to exactly nowhere. Still, as islands in this article go it's at least habitable. In 1816 an Englishman and his family settled here, bringing pigs who eventually became feral. Later two Germans called the Stoltenhoff brothers tried to make a go of living here, only to give up and climb aboard a passing British ship in 1873. Astonishingly, the plateau on the top of the island was not visited by humans until 1938. Inaccessible Island is now a nature preserve, which is very typical of uninhabited islands. It was so declared in 1976, and has also more recently become a UNESCO World Heritage Site. 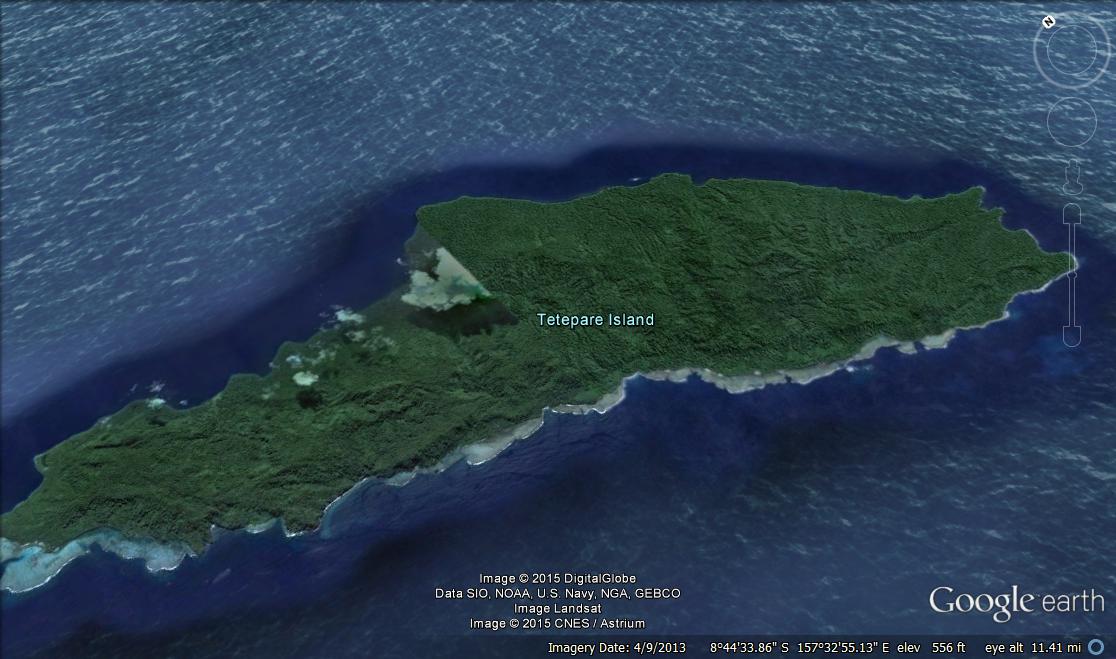 Among all the islands here, this is the one probably the most similar to the kind of place where Tom Hanks was marooned in Cast Away. It's the largest uninhabited island in the Pacific and has extensive jungles and other features. Solomon Islanders--including a tribe of headhunters--once lived on Tetepare, but abandoned the place en masse about 1860, possibly due to war, epidemics and environmental disasters. Coconuts were once raised here, but all other forms of human habitation declined to nothing in the years after World War II. Tetepare is evidently famous for the various species of rare butterflies that live on the island. It also has a population of feral pigs and cats, which I'm noticing is a common condition with desert islands. It is, like most of the others, a protected wildlife area and is now evidently becoming a significant eco-tourism destination. In that sense it may be less "deserted" than the other islands mentioned in this article. If a ship- or plane-wrecked survivor happened to be cast away here, it's likely they would be rescued fairly soon.

The 2000 film Cast Away is one of the purest recent expressions of the centuries-old "marooned on a desert island" story scenario. It was actually filmed in the quite un-deserted Hawaii.

Despite globalization and the encroachment of modern culture into almost every human society, there are still places in the world where human presence is, if not totally unknown, at least not dominant. With satellite photography there are no "undiscovered" islands or countries left on Earth, but the idea of a true "desert island" is not gone, at least not yet. This is just a small sampling of the real estate left on our planet where you could still be stranded in a true Robinson Crusoe sense. I'm not sure any of them are The Blue Lagoon, but they're interesting to think about.

The header image is public domain; Google is the owner of satellite images.