Hiroshima at the dinner table: what the atom bomb "debate" misses. 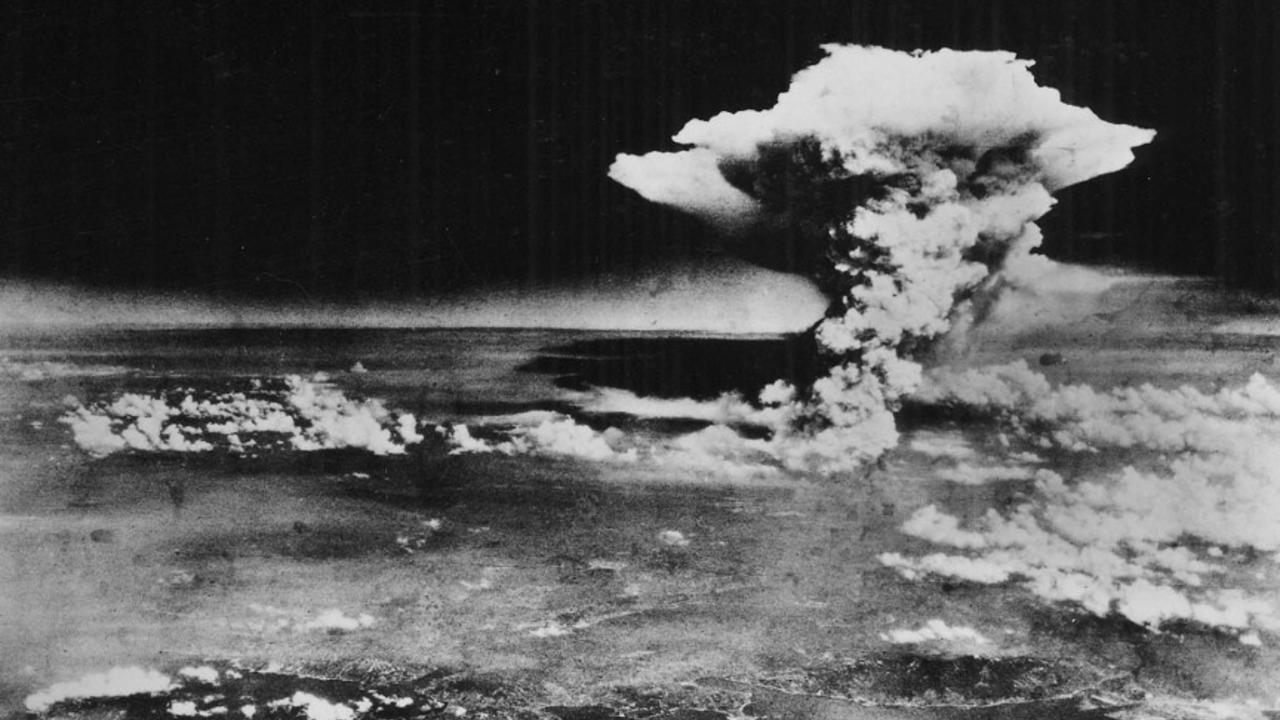 Seventy-five years ago today, on August 6, 1945, the United States dropped the first atom bomb used in combat on the Japanese city of Hiroshima, in one of the most consequential acts in recent world history.

I don't want to hear your opinion on whether or not this was a justifiable or correct decision. In this article, I am not even going to disclose my opinion on whether or not this was justifiable or correct. The point of this blog is to argue why the argument about the Hiroshima bomb, which has been going on in American and world discourse since 1945, is fundamentally pointless and, at least as the argument usually plays out, why it's counterproductive. Understanding history is important, but equally important is an understanding of how we use history, what it means to us and what it says about us. As with purveyors of "fake history" (pseudohistory) or the pointless pantomime about the Crusades, post-1945 dinner table conversation about the Hiroshima and Nagasaki bombs seeks to weaponize the past for the service of modern-day ideological battles.

The debate over whether or not the United States should have used the atom bombs at the end of World War II is, for the most part, fundamentally disconnected from historical reality. That reality is difficult enough to understand, but in most cases people on either side of the modern Hiroshima debate don't want to hear it. It's much easier to debate the bomb when it's viewed as a solitary act divorced from its historical context. Even when the context is remembered, it's too often used in a glib and intellectually dishonest way to reach a predetermined conclusion, and that too does violence to the real issues surrounding Hiroshima. 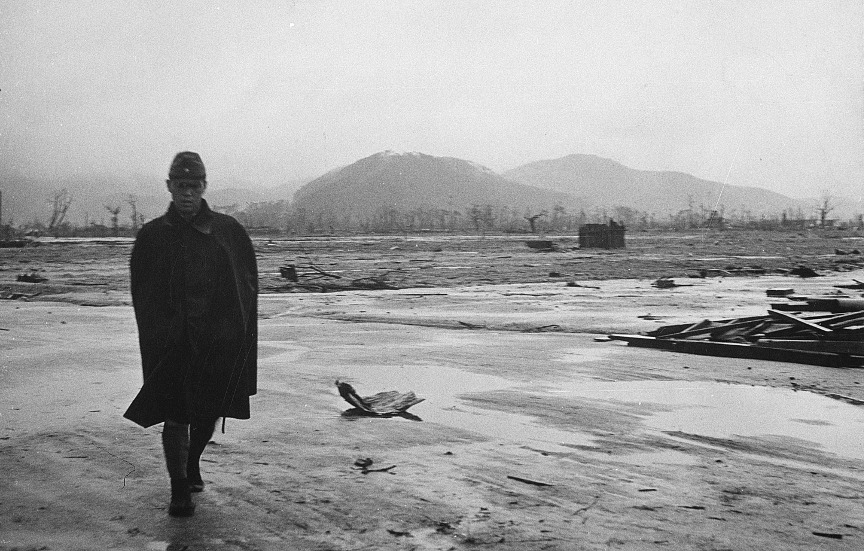 A Japanese soldier wanders the desolate wasteland that an American nuclear weapon made of Hiroshima in 1945.

The question is the use of a nuclear weapon per se immoral in all cases? is not a bad question to ask, but to ask it in conjunction with Hiroshima means cutting off everything that came before it--why the United States embarked on the Manhattan Project, the very real fears of Hitler getting the atom bomb first, and the moral implications of Allied bombing policy, a strategic decision that the leveling of Hiroshima was a natural outgrowth of. There's also the horrific experience of both sides, the United States and Japan, in the battle of Okinawa, which had just finished when the U.S. used the bomb over Hiroshima. The real-world historical reasons why the bomb was used bear little resemblance to the reasons we suppose were debated, or should have been debated, by those American military and political figures who made the decision to use it. The existence of historical context is, to many people, an inconvenient distraction to the Hiroshima debate.

But that historical context, if it is remembered, can be misused too--as a facile and thought-terminating device that automatically judges the atom bomb decision as morally and politically justifiable, period, end of story. "But Hitler..." "But strategic bombing..." "But Okinawa..." are like bars of soap just waiting there to be picked up and frothed into a lather to cleanse the Hiroshima bomb of its very real and very disturbing moral implications. On this side of the debate you often hear things like, "American B-29s killed more people in one night in Tokyo, using conventional bombs, than the number of people who died at Hiroshima!" This is a fact, but what this fact means is hardly as self-evident as it might seem at first. Every time you try to reduce military decisions to a simple moral binary, you run into a host of very insoluble problems; it's easier and more comfortable to retreat into ahistorical simplicity, where we can argue about Hiroshima over dinner without confronting our moral selves. "The bomb saved a million lives. Can I have another piece of pie, please?" 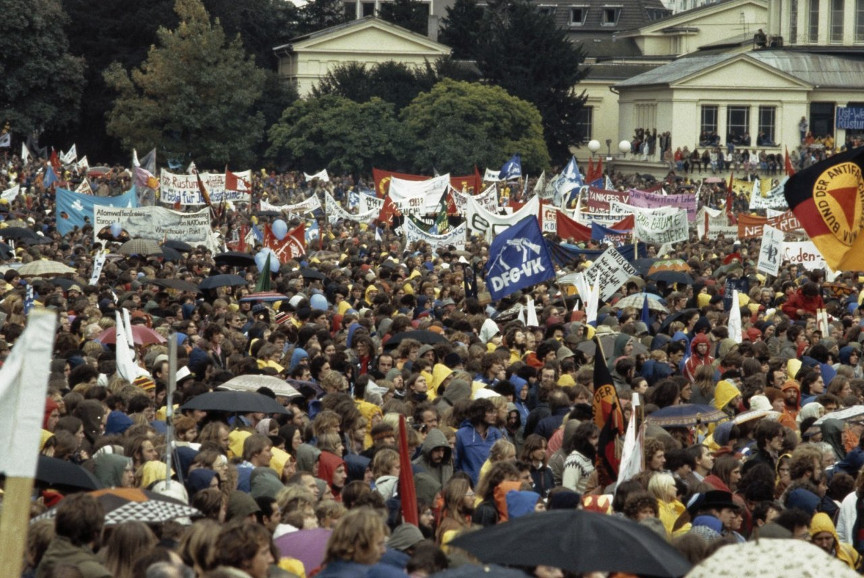 In the early 1980s, Europeans (and many Americans) vehemently protested the deployment of U.S. nuclear missiles in Western Europe. These protests shaped the historical Hiroshima bomb debate.

That the Hiroshima debate is a chimera, and merely a stalking horse for modern ideological arguments, is demonstrated by the timing and the circumstances of when it reached its apex. The Hiroshima debate, at least in American public life, was never more animated than it was in early August 1985, the 40th anniversary of the event. What was going on then? The Cold War was at its second and tensest peak. Ronald Reagan had just deployed U.S. intermediate-range nuclear missiles in Europe, a decision that caused the public of most Western European countries to rise en masse in ferocious protest, and reignited political debates in the U.S. that had lain dormant since the Vietnam era. The specter of a civilization-terminating World War III was more real to more people in 1985 than it ever had been before, and arguably has been ever since. And what were we doing in 1985? Pretending to argue about the two bombs that were dropped 40 years before, when what we were really arguing about were the thousands of bombs we feared were about to be dropped on us in the very near future.

The debate has arguably gotten less sophisticated, and less relevant, since 1985, at least among Americans. If you're a liberal who believes in international cooperation to prevent conflict, helping the less fortunate, and think the United States has lost its way in foreign policy in the last few decades, you probably think the Hiroshima bomb was an indefensible war crime. If you're a conservative who believes in American exceptionalism and thinks the United States should continue to exert its influence in the world, you probably think the Hiroshima bomb was totally justifiable. This supposedly historical debate about something that happened in 1945 has, like so much else in our society, been poisoned and bastardized by our modern political polarization. I continually lament the degree to which history has become an arsenal where modern axe-grinders go to find yet another weapon to use against their ideological opponents. 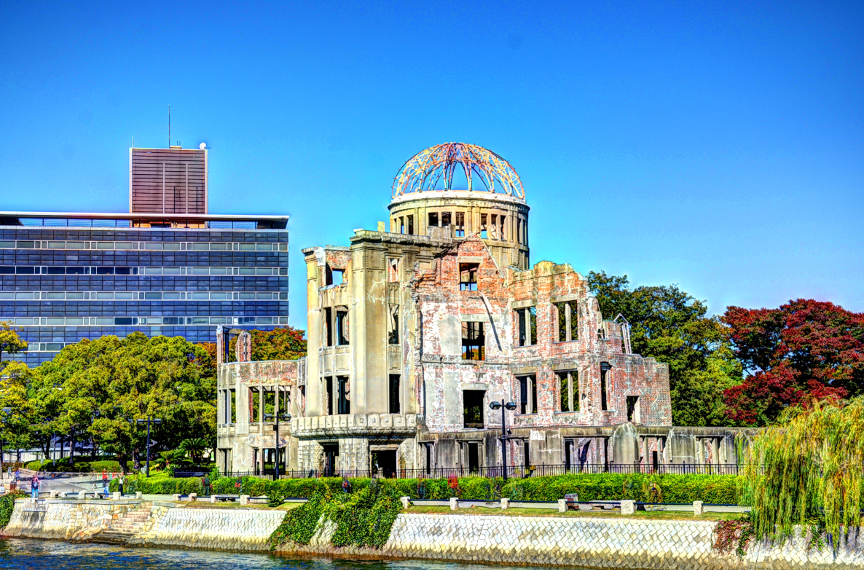 The "Hiroshima Peace Dome" is universally recognized as a symbol of remembrance of the victims of the attack. The bomb exploded directly over this building on August 6, 1945.

In any event, let's stop arguing about Hiroshima and Nagasaki--or at the very least, let's stop arguing about these events as if the historical answer we think we want to reach functions as an absolution of our doubts or a validation of our modern viewpoints. Tens of thousands of real people died at Hiroshima and Nagasaki, and they died as a result of an extraordinarily complex thicket of historical, moral and political questions that defy easy explanation. Let's stop pretending that the world is as black-and-white as we usually wish it was.