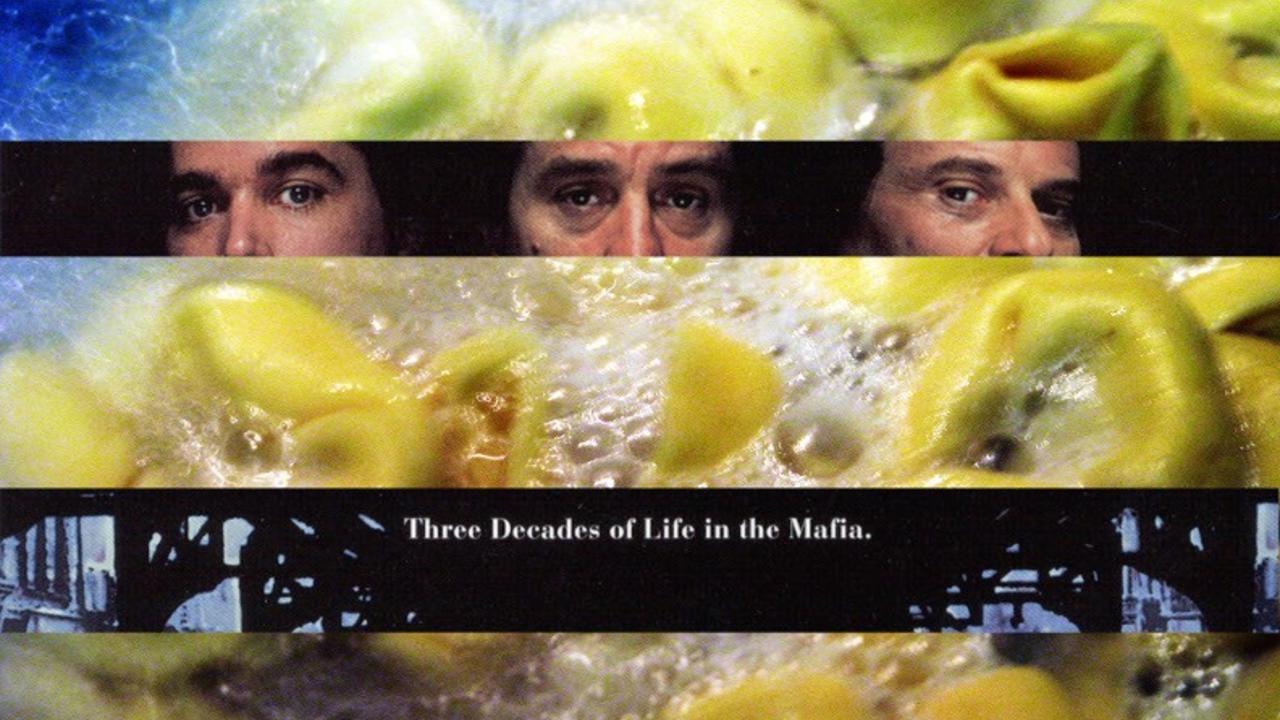 This is Part III of my essay on food, alcohol and wine depicted in Martin Scorsese's masterpiece, GoodFellas, which I argue are a crucial part of understanding this great film. Part I (the film's first third) is here, and Part II (second third) here. Spoilers ahead, obviously.

The most memorable food/wine scene in GoodFellas is the prison dinner, and this is where things really ramp up. Henry Hill (Ray Liotta) has been sent to the big house for roughing up a guy on account of a loan shark, and the film shows him living, isolated from the other prisoners, in a sort of special camp within the prison. Many of his buddies from the underworld are all there, including boss Paulie (Paul Sorvino). Although life is miserable for rank-and-file prisoners, it's comfortable for mobsters, and food and drink are a huge part of it. In this closed compound they fry steaks, eat fresh fish and lobsters, and drink wine. Henry narrates, explaining how they usually have a pasta course, with a meat or fish following. We see a rich Italian tomato pasta sauce being made up ("Don't put too many onions in the sauce!") and a very ingenious way to cook fresh garlic--Paulie slices it with a razor blade so thin that, according to Henry, it liquifies in the pan with a little oil. I've never tried this technique, but I may.

Henry is integral to the feast. He has some way of smuggling in fresh food, which he pulls out of a bag: bread, peppers, onions, salami, prosciutto, cheese, Scotch (a bottle of J&B), and two bottles of wine. Unfortunately we don't see the labels on the wine very long so I can't identify them. Also in the package is something Henry hides from Paulie: a bag of cocaine, which he evidently deals to the inmates. How he gets all this stuff is not immediately explained.

The famous "prison dinner" scene, which gives us a lot of details on food, helps define the lifestyles of the gangsters in Scorsese's GoodFellas.

The prison dinner, the most lavish of the "gangster feasts" depicted in GoodFellas, is key evidence of how Scorsese defines the gangster lifestyle through food and drink. They use food not only to keep themselves comfortable while doing time, but to display their heightened status to the rest of the prison's inmates (and its guards). There's also an economic factor. While in prison a mobster can't be out earning his keep through whatever illegal activities he's used to doing. This is why Henry deals drugs on the side, a point made clear in the next scene where we see his wife Karen (Loraine Bracco) visiting him. She's the source of the food and wine, smuggled in under her coat, as well as the drugs.

As soon as Henry gets out of prison, another gangster feast ensues. This one is really mouth-watering, with giant plates of Italian sausage, pasta and lasagne gliding past the camera. There's also wine (of course). This part of the film establishes that Henry has continued dealing drugs even after leaving prison, something of which Paulie is afraid, for fear of winding up in prison forever. From this point on Henry is shown not only eating, but snorting lots of coke. 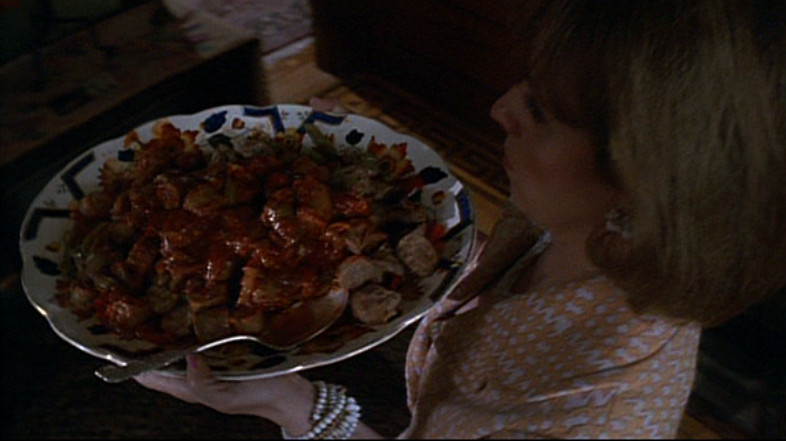 A giant platter of Italian sausage with tomato sauce glides casually by the camera in a scene from GoodFellas.

Henry's friend Jimmy (Robert DeNiro) pulls off a huge and lucrative robbery, the Lufthansa Heist of December 1978. At a Christmas party, where everyone is doing shots, they're flashing the money around and congratulating each other. Then people start getting whacked (killed). The first is Stacks (Samuel L. Jackson), whose killers argue about taking a pot of coffee with them from the scene of the crime. Frankie Carbone (Frank Sivero) is found hanging in a meat truck frozen solid with sides of beef. The garrulous Morrie (Chuck Low) is gruesomely stabbed with an ice pick, while he thinks his friends are taking him to "the diner down on the Boulevard" to get Danish for his wife. Then, finally Tommy (Joe Pesci) is murdered by rival gangsters, revenge for the Billy Batts killing earlier in the film; Jimmy gets the news just after eating breakfast at a diner. All of these murders have one thing or another to do with food or drink. Here Scorsese is showing the gangster lifestyle, defined partially by food and drink, going bad.

The final gangster feast coincides with Henry's ultimate apprehension, in May 1980. On this chaotic day he's dealing guns and drugs while hosting a family dinner party, for which he's cooking. He's making ziti with tomato sauce and meat gravy which includes beef, pork butt and veal shanks as well as flame-roasted peppers. The side dish will be string beans with olive oil and garlic. We also see Henry (and hear on the narration him talk about) breading veal cutlets that he intends to fry as an appetizer. While all this is going on Karen is drinking red wine. The scene is shot so beautifully you can almost smell the Italian food cooking in the kitchen. Of course it all goes wrong--federal agents ambush Henry as he leaves the house just after dinner. In the film's ultimate twist, Henry turns state's evidence against Jimmy and Paulie, and he and his wife end up in the Federal Witness Protection Program. 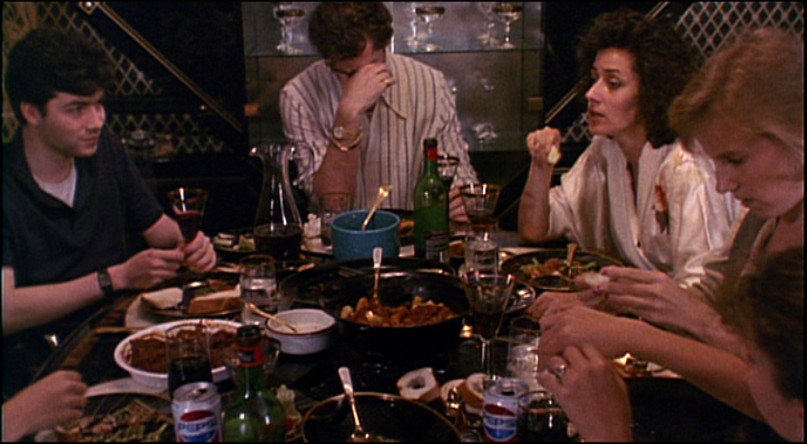 Henry's last dinner before his arrest is at least a memorable one. Note the Italian dishes and wine.

The theme of food persists until the very last scene of GoodFellas. After the gangsters have gone to prison, Henry is seen living in a boring suburban house in a subdivision. In narration he laments, "I can't even get decent food. Right after I got here I ordered some spaghetti and marinara sauce, and got egg noodles and ketchup. I'm an average nobody. I get to live the rest of my life like a schnook." Here, finally, is the end of the gangster lifestyle: what Henry misses about it most--more than power, drugs, or freedom--is the food.

Food, wine and alcohol are so prevalent in GoodFellas that they're virtually a character unto themselves. Far from mere set dressing, Scorsese uses cuisine to define the characters and make us, the audience, understand why they loved being gangsters and what a life like that, despite its obvious risks and drawbacks, promised for them. The treatment of food is one of the reasons why this film is so incredibly rich and lifelike. It's one of my all-time favorites, and hopefully after reading this you may see--and taste--a little bit more in it than you did before.