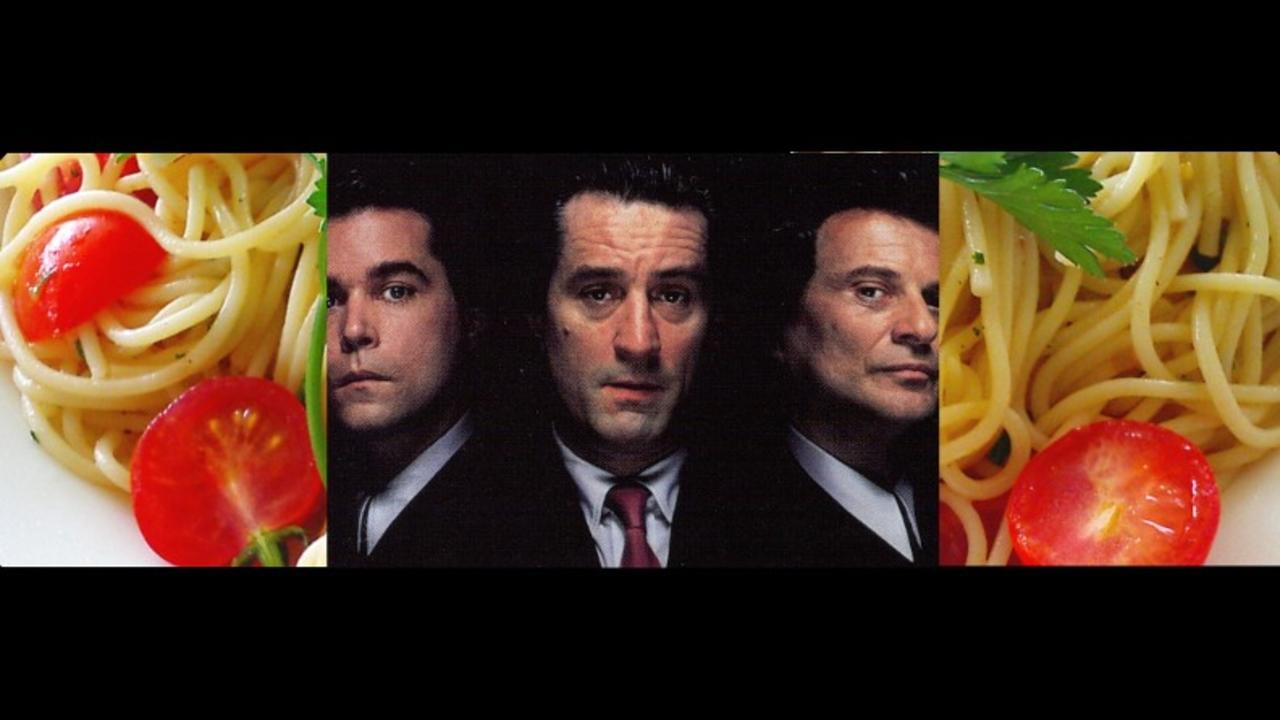 This is Part II of my exploration into the culinary (and alcoholic) dimensions of Martin Scorsese's masterpiece, GoodFellas. Part I, which deals with the first third of the film, is here. It goes without saying that there are a lot of spoilers here, but the film is 30 years old!

For all the "gangster feasts" in GoodFellas, there surprisingly isn't one in the lavish wedding scene where Henry (Ray Liotta) and Karen (Lorraine Bracco) are married, a curious Jewish wedding populated by Italian-Americans. The wedding scene features a huge cake, but most of this scene involves wine and champagne. Indeed, now that Karen has joined the family and part of the narrative shifts to her, suddenly food is absent from the picture for a while, perhaps reinforcing the notion that the gangster brotherhood--held together, as I showed in the previous article, partially through extravagant food and drink--doesn't include women.

The large living reappears as Karen narrates how close-knit the gangsters' families are, sharing weddings, christenings, and birthday parties. At a birthday party for a child who appears to be the son of Jimmy Conway (Robert DeNiro), in addition to the cake we see some sort of Italian casserole, and the men are drinking Budweiser. A milestone occurs in Henry's life as he evidently gains ownership of a bar. This is where one of the film's pivotal scenes--the murder of rival gangster Billy Batts, after insulting the hot-tempered Tommy (Joe Pesci)--occurs. This violent episode leads to one of the film's most noticeable meals, which occurs when Henry, Jimmy and Tommy wind up at the home of Tommy's elderly mother, who, despite it being in the wee hours of the morning, lays on a feast. She is unaware that Batts's dead body is in the trunk of Tommy's car parked outside. 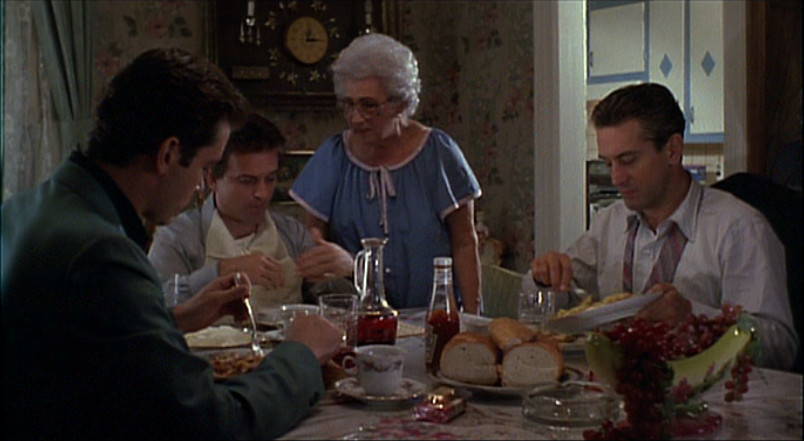 A breakfast (?) feast, laid on by Tommy's Italian Mother, goes on while a not-quite-dead gangster struggles in the trunk of the car parked outside in GoodFellas.

This scene is interesting for several reasons. The mother is played by Catherine Scorsese, Martin's real-life mother. I always assumed, when remembering the scene, that it featured some sort of traditional Italian dishes, but looking at the movie again the meal appears to be breakfast, with scrambled eggs, pancakes and/or waffles, and something on which the Robert DeNiro character slathers a lot of ketchup. The men are drinking coffee, not booze. It's one of the few meals where characters comment on the food. DeNiro says, "This is delicious," and Pesci comments it is but it's "like lead." It's curious that Scorsese doesn't linger on the table like he does in other scenes, clearly identifying what the meal is.

Batts, who isn't dead, is "re"-killed messily and buried in a rural area. In a later scene, at a dinner party--where we don't see the food, only wine on the table--Paulie (Paul Sorvino) tells Henry he's getting heat from a fellow mob family about the missing Batts. When they hear his gravesite is being turned into condominiums, Henry, Jimmy and Tommy go to dig him up. In this spectral, red-lit, hellish scene, Tommy jokes, "Hey, my mother is going to make red peppers and sausage later!" Here the food is again part of the gangsters' milieu. It's probably this scene that made me think the breakfast feast was red peppers and sausage (an Italian favorite), so I was surprised to re-watch the film and discover that it wasn't.

The Spider scene. (Language is NSFW!)

Another of the film's most memorable murder scenes occurs in relation to drinking. At a poker game in a basement somewhere--the film never identifies it, but it's supposed to be Robert's Lounge--the gangsters are playing cards and a young hood named Spider (Michael Imperioli, who later went on to produce Spike Lee's Summer of Sam) is serving drinks. A fracas over the drinks ends up with Tommy shooting Spider in the foot. After an interlude, the second half of the sequence involves Spider, now in a cast, talking back to Tommy--who pulls out his gun and murders him in cold blood. Supposedly this really happened. Spider's remains were said to be buried under Robert's Lounge; an FBI dig in 1980 found bones down there but couldn't specifically identify them.

The film next depicts Karen and Henry's lives spiralling out of control, with jealousy, recriminations, Henry's affairs and the threat of violence constantly hanging over them. A very interesting scene appears as Paulie and Jimmy go to an apartment that Henry has set up for his mistress to tell him that he has to go back to his wife. The scene shows the aftermath of a party, with empty drink glasses and Budweiser bottles, and also Chinese take-out cartons. (The Godfather also uses Chinese take-out as a way to show the real lives of gangsters, in that case waiting for news about a hit). Henry is sent on a mission to rough up a guy who owes money to the mob, and when he comes back he's supposed to return to Karen. In fact he's turned in by an FBI informant and is sentenced to prison. 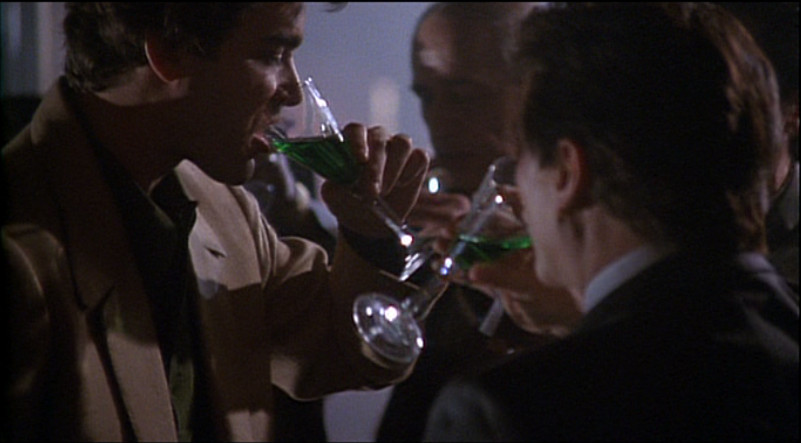 What are they drinking here? Absinthe? Or is it Creme de Menthe? Your guess is as good as mine.

In the final scene in this section, Henry is "celebrating" at a Manhattan bar just before being taken off to prison. Karen mopes silently in tears. The gangsters toast Henry's going-away with some sort of green liquor which may be absinthe or Creme de Menthe. Bleary-eyed and popping pills, Henry gets into a limo outside the bar and says to the driver, "Take me to jail." We are then set up for the single most amazing culinary scene in GoodFellas...the prison feast!

I'll take that up in Part III, which is coming soon. Thanks for reading!