Guns and Provolone: Food, booze and wine in Scorsese's "GoodFellas." [Part I] 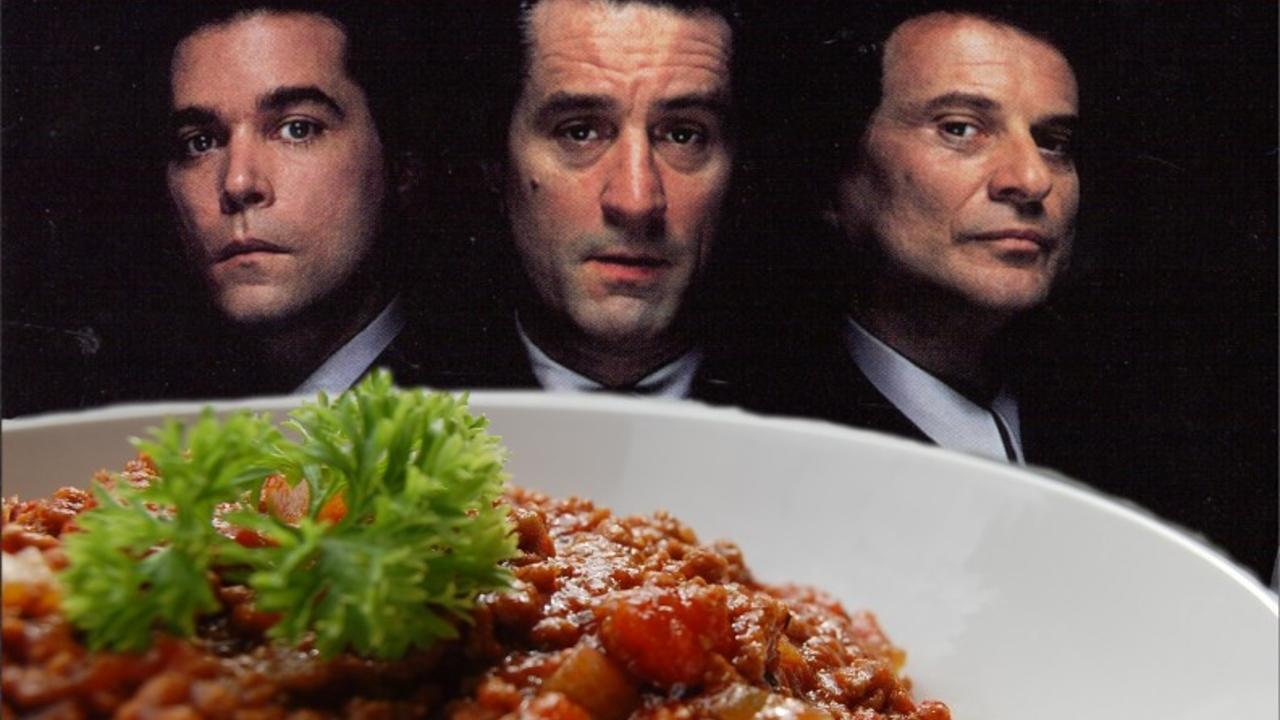 GoodFellas is undoubtedly one of my favorite films. It's a great movie, one of the greatest ever made, and a lot of critics agree; it's on the Library of Congress's National Film Registry as well as many other best-of-all-times lists, and it lives on in popular culture. Martin Scorsese's 1990 gangster epic, based on the real life story of New York hood Henry Hill, is pretty close to a true story and somehow manages to capture the texture of gangster life in a way that even Coppola's The Godfather couldn't quite do. Part of that, I'm convinced, is the realness with which Scorsese, himself an Italian-American from New York City, depicts life in that part of the world and that ethnic group. Watching GoodFellas, whose protagonist/antihero is only half-Italian ("Just the good half!"), you almost feel Italian yourself even if you're not.

Watching GoodFellas again recently, I was struck, as I've been before, by the centrality of food to the movie. I mean, aside from movies that are at least ostensibly about food, like perhaps Julie & Julia or Jon Favreau's Chef, I can't think of another mainstream movie where food features quite so prominently. And not just food, but also booze and wine. Many, many scenes in GoodFellas feature food, wine or some other kind of alcohol, and I don't know if anyone has ever written about this aspect of the movie before. So, without further ado, let's take a look, because I think it might make you see this wonderful film in a way you haven't before. 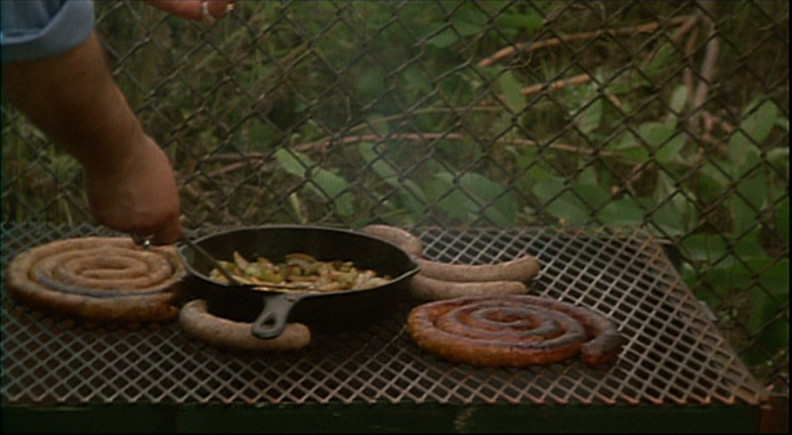 Look at those sausages! This is the first "gangster feast" scene, described below.

The first appearance of food in GoodFellas occurs in the prologue, where 13-year-old Henry Hill (his story is narrated by Ray Liotta who plays him as an adult) is describing his working-class upbringing in Brooklyn. Henry leaves the table in the morning, ostensibly for school, which shows the all-American breakfast (it's 1955), including pancakes, syrup and orange juice. In this part of the movie Henry is just falling in with the Italian-American gangsters in his neighborhood, who use a local pizzeria as a front. The pizzeria is the scene of two ugly incidents early in the film: the first where gangsters threaten the mailman who delivers mail to Henry's house by literally pushing his head into a pizza oven, and the second where a gangster, shot in the hand by rival hoods, retreats to the pizzeria, bleeding profusely, to bandage up. In both scenes you see the traditional accouterments of Italian restaurants: pizzas, Parmesan cheese on the tables, etc. The juxtaposition of violent images with these tasty trappings helps create a mood of tension early on.

Between these two scenes comes the first of what I'll call the "gangster feasts" in the picture. At a backyard barbecue, neighborhood boss Paulie (Paul Sorvino) holds court with his various subordinate hoodlums while a lavish summer feast goes on around them. The opening shot of this sequence shows two gigantic coils of Italian sausage on a backyard grill, plus a pan of what appear to be peppers and onions. The gangsters, including Paulie, eat the sausage on fluffy buns and drink some sort of booze that looks like whiskey. Paulie eats slowly and nods ominously--the obvious implication is that he's agreeing to a hit. 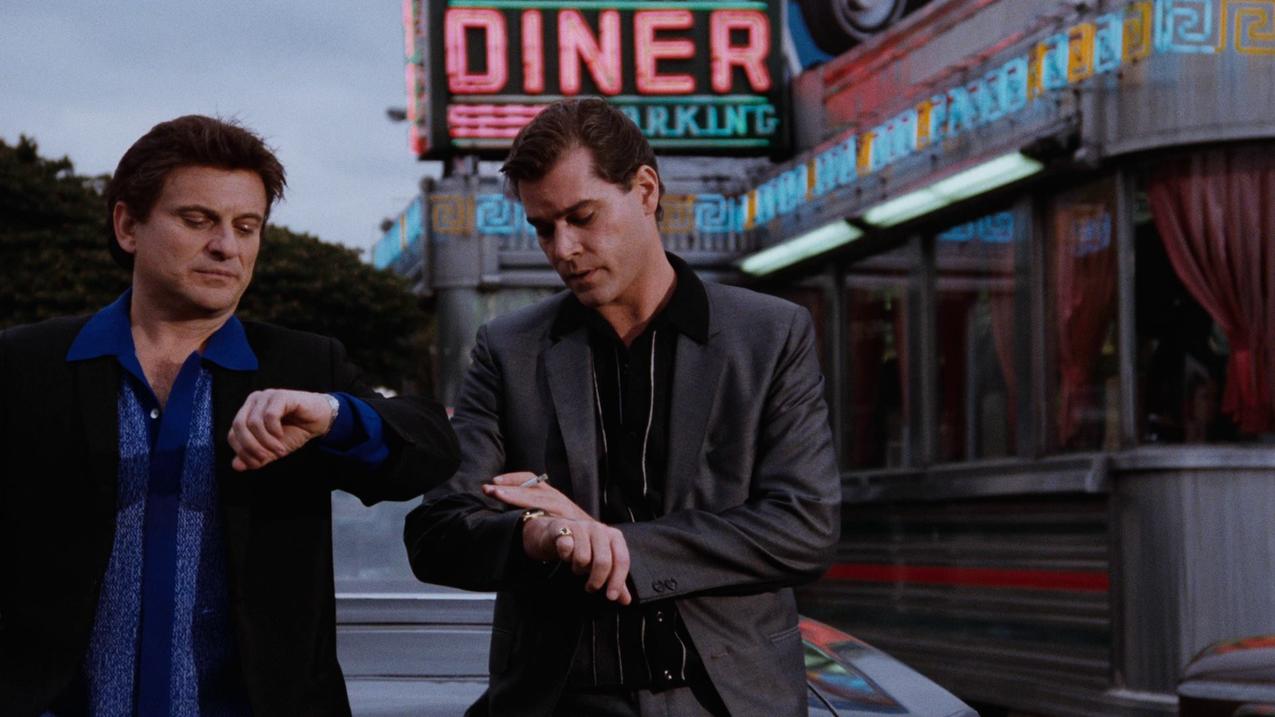 Even scenes that don't directly involve food are still often tied to restaurants or dining. Early in GoodFellas, Henry (Ray Liotta) and Tommy (Joe Pesci) await a score outside a seedy airport diner.

Almost immediately after this there's more food, the second "gangster feast." This takes place at a bar of some kind, and Henry, still young, is buzzing about serving drinks and sandwiches to slick hoods playing cards and guzzling booze. One of these is Jimmy Conway (Robert DeNiro), a key figure in the rest of the film. His first words to Henry are to order a drink, "Seven and Seven" (presumably 7-Up and Seagram's 7 whiskey). In the brief backstory given for Conway, he's revealed to be one of the city's biggest hijackers of trucks. What's his favorite cargo? Shrimp and lobsters. "They went really fast," Henry explains in the narration.

Fast-forward to 1963, when Henry is now a part of a crew including Conway and the Italian gangster Tommy (played in an Oscar-winning performance by Joe Pesci). This new reality is introduced in a long tracking shot through a red-lit restaurant which is filled with gangsters, all guzzling booze and all with weird nicknames like "Frankie the Wop" and "Jimmy Two-Times." Another tracking shot starts at the end of a dinner table positively heaping with incredible eats, including lobster tails and champagne, and finally ends on Henry and Tommy, finishing their drinks--Crown Royal is among the bottles. What follows is one of the film's most-quoted scenes, the "What's so funny about me?" exchange. As we're only 18 minutes into the picture, it's clear Scorsese is showing how the shared experience of food and liquor--the more expensive the better--is a bonding agent among the gangsters and their families.

The infamous "What's so funny about me?" scene. Lots of NSFW language, obviously. Notice the food and bottles on the table.

A little later, gangsters are shown operating out of this same restaurant, whose owner has gone to Paulie for protection. Seemingly dozens of hoods are moving boxes of food and drinks, especially liquor, in through the front and out the back, as Henry, in narration, explains how Paulie fleeces the place by "running up bills on the joint's credit." One of Henry's coming-of-age rites as a gangster is to help burn this restaurant down after Paulie ruins its credit. Here, food and booze are again identified as part of the stock-in-trade of gangsters' businesses, as they have been since the beginning.

Watch the amazing tracking shot I describe below. Here it is--keep your eye out for the food and wine, it's pretty much everywhere.

Restaurants and nightclubs continue to play a prominent role in the next section of the film which details Henry's relationship with Karen (played by Lorraine Bracco), whom he eventually marries. The masterpiece of this sequence is another tracking shot, a very long one where Henry and Karen enter a posh restaurant, bypassing the long lines of customers, through the kitchen. Ironically the first food you see in this scene is a not-very-appetizing sandwich being eaten out of foil by a gangster standing guard. But then, in the kitchen, a waiter is pouring wine, the camera passes a table heaped with fresh grapes and pineapples, Italian chefs are making mouth-watering dishes, and you even see a guy making an elaborate sculpture out of what appears to be butter. At the end of this sequence Henry and Karen are seated in the restaurant--for which a special table is prepared for them--and a waiter comes up with nothing less than a bottle of Dom Perignon champagne, which he says is from "Mr. Tony" at a neighboring table. Henry and Karen are still drinking the champagne out of glasses in a car later as their romance blossoms.

Martin Scorsese is an extremely meticulous director, an absolute perfectionist. Everything he does is as carefully constructed as an Old Masters painting. You can bet that every bit of food, booze and wine you see in the film was put there on purpose at his suggestion. Food, which is ignored in most movies, is absolutely central to GoodFellas. In fact, it's so central that it's a major character in the story. This is one of the reasons why it's an amazing movie.

I'm barely 1/3 of the way through the picture, so there will certainly be future installments of this series tomorrow and possibly the next day. Until then, have a glass of Italian wine and enjoy thinking about all the awesome food in this flick...or have some of your own!

Part II will be coming soon.