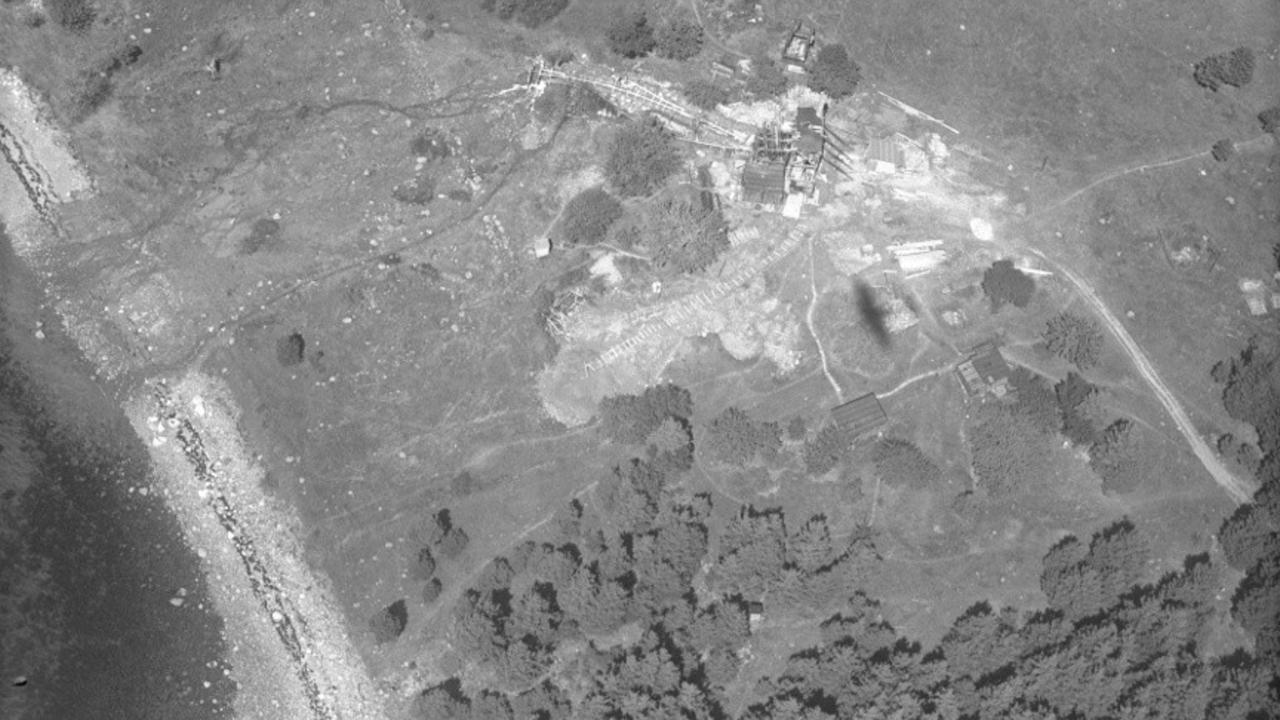 This article is third in a series on the mysterious “treasure pit” of Oak Island, Nova Scotia, where people have been conducting treasure hunts for, it is said, over 220 years. There is, in reality, no treasure buried on Oak Island and there never was. In Part I of this series, I explained what the legend was, and the key fact that the “flood tunnels,” which are supposedly the trap that has prevented all these treasure hunters from bringing up anything from beneath the island, have never been found (despite claims by believers that they have, which are mistaken). In Part II, I explained why there is no physical evidence of treasure infrastructure; the “box drains” on the beach have nothing to do with treasure and in fact are part of an old salt works. In this installment, I’ll address the paucity of the historical record for what has been happening on Oak Island, supposedly since 1795.

The origin story of Oak Island is not the burial of treasure, but the first treasure hunt, said to have occurred in 1795 when three kids discovered the initial pit and, upon digging, found the oaken platforms leading down into it. Invariably this account precedes two other accounts of treasure hunting, a dig that is said to have happened in 1803 (some sources say 1801 or 1804), and then a “Truro Company” expedition in 1849. The accounts of these early digs are crucial to the legend, because it is on these early digs—and these alone—that the key discoveries were made: the oak platforms, the flood tunnels, the initial discovery of the box drains, and the “chests” at the 98-foot level which, according to accounts, were drilled into with an auger during the 1849 expedition, passing through “metal in pieces.”

Note what’s being laid out here in these early accounts. You have an explanation of (a) how the treasure pit was initially discovered [the 1795 shenanigans]; (b) the springing of the “trap,” meaning the flood tunnels, that makes the recovery of the treasure so difficult [the 1800s expedition]; and (c) the further discovery that makes it seem at first blush like the treasure really is there and is just out of reach [the Truro Company dig]. Notice, if you were an investor trying to sell someone on the idea of financing a treasure hunt on Oak Island, these are exactly the three points you would need to convince them. 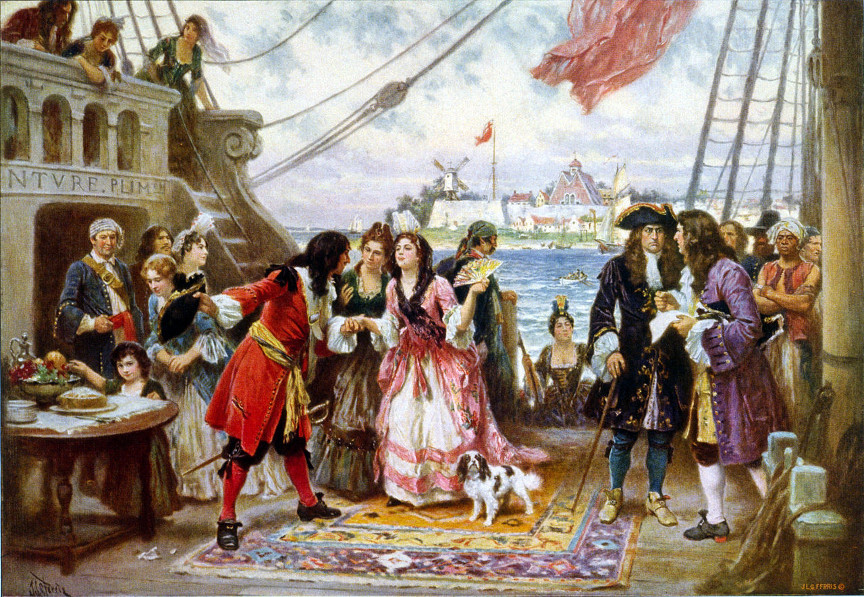 Much of the mythology around the Oak Island legend naturally ropes pirates and buccaneers of the past into the story. Captain Kidd (shown here, in red, in a famous painting) is sometimes offered by believers as a suspect for who might have buried the treasure. The argument makes no sense.

The thing is, though, that there’s no contemporary evidence of these operations—no primary sources, as we historians say. When I began reading about Oak Island in 1991, I simply assumed these expeditions were recorded as fact. They’re not. Only later, after I started graduate school as a trained historian did I notice that books about Oak Island never cite any primary sources when they lay out the legend, the usual story about the kids finding the island in 1795 and the first digs, etc. The books all cite other books about Oak Island, secondary sources. This is exactly how pseudohistory operates—you see the same effect in books on fringe subjects like “ancient aliens,” Nazi occultism, JFK assassination, UFOs, etc.

The first printed accounts of treasure hunting activity appeared in British and Canadian newspapers in 1861. I found a reference to a visitor to Oak Island writing in 1857 of seeing evidence of prior digs there, but there is certainly nothing contemporary to attest to the alleged 1795 discovery and the 1804 dig. Some sort of license to dig on Oak Island was evidently issued in 1849, and that’s the only evidence that the “Truro Company” dig took place—of course the license may have been issued and the dig never actually went off, or perhaps it did, but if it did there is no direct evidence of it. 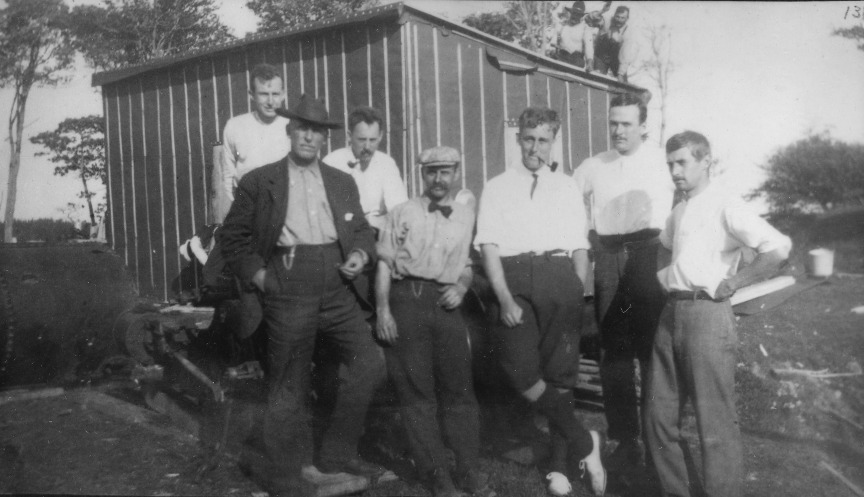 The legend of treasure at Oak Island has attracted some star talent to back expeditions to find it. In this photo, taken of an early 20th century treasure company, you can see future U.S. President Franklin Roosevelt (fifth from left), who invested in such a venture.

Combine this flimsy record with the genealogical evidence that Daniel McInnis and Anthony Vaughan, usually said to be children or teens at the time of the discovery, were actually in their 30s in 1795; that the island was inhabited at that time (not uninhabited, as the story usually tells it); and that the story is never consistent and has changed markedly since even the 1939 article in Popular Science magazine that I read, whose account was very different from the 1991 article in the Encyclopedia of Unsolved Mysteries book that sparked my own interest; all of these things add up to the fact that we simply can’t trust the account(s) usually told about the discovery and the first treasure hunts.

Another myth, an inexplicable favorite of the "History" Channel show, concerns a resident of the island, Samuel Ball, a former slave who is rumored to have been the richest man on the island. The inference, to which believers jump without evidence, is that he found the treasure or part of it. That's not what happened at all. Ball and a partner owned land on Oak Island, farmed it intensively and became quite prosperous, relatively speaking; Ball died in 1845. For him to have achieved wealth by treasure, he would have had to have sold assets and engaged in various repeated financial transactions, of which there are exactly zero records. There's also the spurious racialized angle of this story: the idea that a Black man in 19th century Canada could not have become financially successful on his own merit, but could only have done so by finding buried treasure. It's a patently ridiculous argument.

So Where Did the Legend Come From?

The Oak Island legend closely resembles numerous other “buried treasure” legends that were very hot in popular culture in the 19th century. (Both Robert Louis Stevenson’s Kidnapped and Edgar Allan Poe’s “The Gold-Bug” crib heavily from these legends). Treasure stories of this kind often involved an initial discovery by children. They also involved occult-themed or supernatural clues, as well as a trap that prevented recovery of the treasure except by someone especially enlightened or virtuous. In fact, in most of these stories, the trap was a supernatural one. The main difference between these tall tales of the 19th century and the Oak Island legend is that in the latter, the trap is purely mechanical: the “flood tunnels.” This, more than anything else, is I believe why this legend has survived into the modern era where the others haven’t.

[Above] Buried treasure legends, especially involving children, were quite popular in the exact era that the Oak Island Money Pit legend got started. Edgar Allan Poe's 1843 short story "The Gold-Bug" is based on such legends. Here is a movie version of the short story, adapted as a TV special in 1980.

Treasure stories with a supernatural bent—there’s a ghost guarding the treasure (which is the plot of every Scooby-Doo episode, except the ghost turns out to be fake)—are, in our modern world, explicitly recognizable as folklore. They’re not likely to be taken as factual truth. If the trap, however, is changed from a supernatural one to one that’s plausible in the real world, what you’ve done is given the legend legs to rise above the supernatural wives’ tale milieu. This is, I think, exactly what happened in the Oak Island case. I’ll return to this hypothesis in the final article in this series.

In the next (and final) article, I’ll describe the logic problem at the heart of the Oak Island legend—which alone is a very strong indicator that there is nothing buried there, and never has been.

All images in this article are in the public domain/Creative Commons 0 license. I am not the uploader of the YouTube clip embedded here.