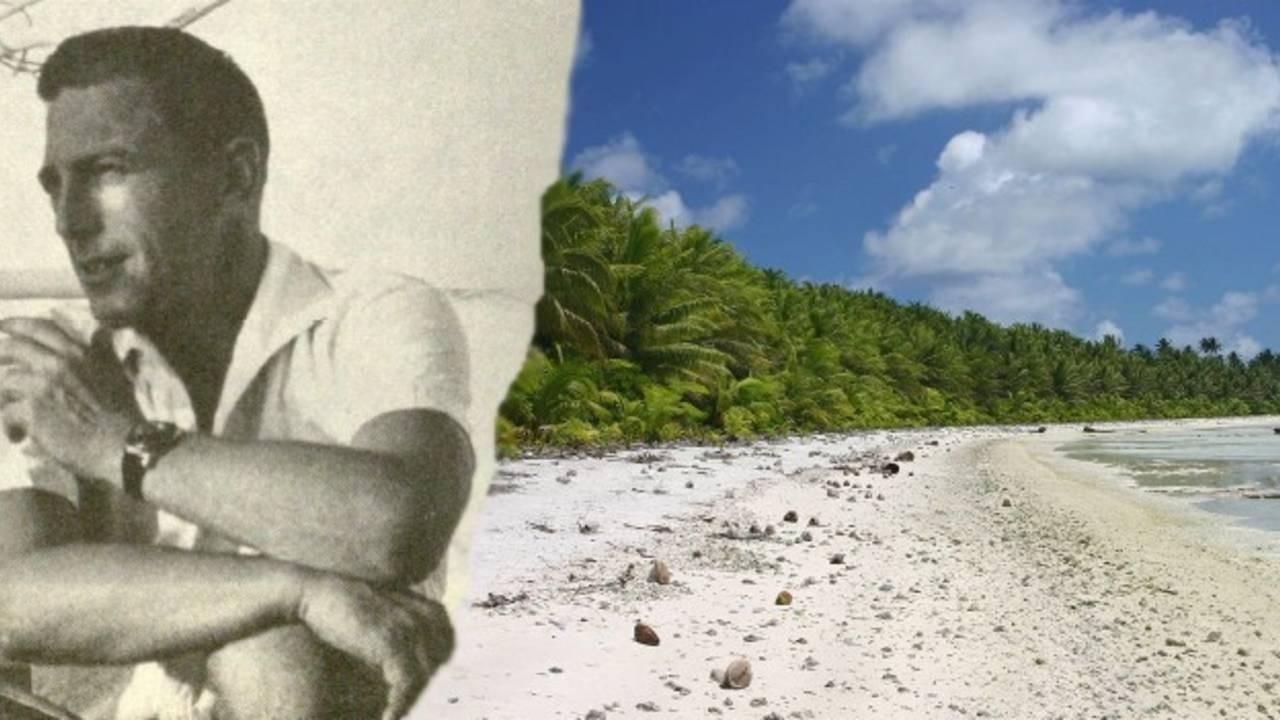 Forty-five years ago today, on August 30, 1974, at least one and probably two grisly murders occurred in one of the most faraway locales on planet Earth--a small Pacific atoll called Palmyra, a thousand miles south of Hawaii, which has no permanent human population. The one victim that we know of was Eleanor Graham, called Muff, but her husband, Malcolm "Mac" Graham III, age 43, vanished. The married couple were yachting around the Pacific on their impressive sailboat called the Sea Wind, and they had unfortunately chosen the wrong island to camp on.

The killer was Buck Duane Walker, also known as Wesley G. Walker, a tough ex-convict and noted con artist, who had also sailed to Palmyra that summer with his girlfriend, Stephanie Stearns. The Grahams were upper-crust people, pretty conservative and reserved. Walker and Stearns were thought of by the Grahams as "hippies," free-spirited, but Walker certainly had a dark side. Their boats were anchored in a lagoon near each other, and the couples inevitably came into conflict. Stearns was pretty easy to get along with so most of the conflict came from Walker.

On August 30, according to Stephanie Stearns, Buck Walker told her that the Grahams had invited the two of them over for dinner aboard the Sea Wind. They showed up at 6:30 PM but the Grahams weren't there. Walker told his girlfriend that they had told them they were to "make themselves at home" if they (the Grahams) weren't back yet from fishing. Dark came, no sign of them. In the morning they began searching and found an overturned boat on the shore of the lagoon. Walker and Stearns concluded that the Grahams had a fishing accident.

What happened next was a subject of dispute. Stearns and Walker took over the Graham's ritzy yacht, the Sea Wind, and sailed it back to Hawaii. Originally they told authorities that their own boat, the Iola, got stuck on a reef at Palmyra, but Stearns later admitted they scuttled the Iola in favor of stealing the Sea Wind. Although authorities strongly suspected the couple had murdered the Grahams, no bodies were found. Walker and Graham were both convicted for the theft of the boat. They were no longer romantically involved. 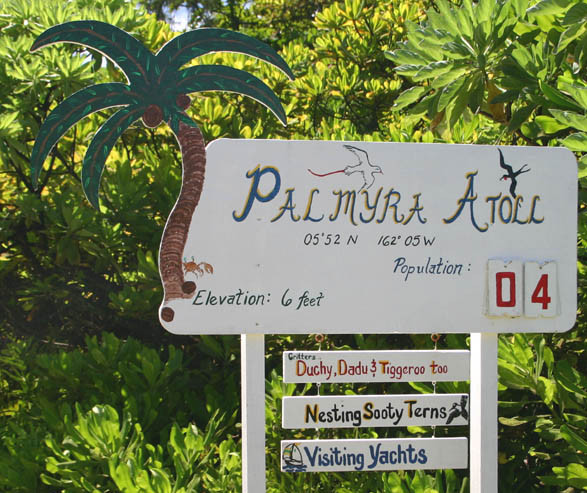 The sign is friendly, but Palmyra itself--not so much.

In 1981, a subsequent visitor to Palmyra Island found a human skull in the sand not far from where the Grahams' boat was said to have capsized. The bones had fallen out of an aluminum box found open on the beach. The skeleton was identified as Muff Graham, and she died in very grisly fashion--hit over the head, dismembered, and her face burned with a welding torch. Her body was stuffed inside the metal container and weighted down to sink in the lagoon, but in 1981 it floated up. There was no sign of Mac's body.

The thing was, when they were back on the island in 1974, Stearns and Walker saw two aluminum crates, left over from when Palmyra was a surplus depot during World War II. Investigators assumed Mac was in the other box, which for some reason never floated up.

Buck Walker and Stephanie Stearns were tried separately for the murder of Muff Graham. Walker was found guilty in 1985. Stearns, whose defense attorney was Vincent Bugliosi, was acquitted. She successfully convinced a jury that Walker committed the murders alone, having to hide the bodies in the aluminum boxes to conceal them from her as well as the authorities.

Buck Walker was paroled in 2007. After this he wrote an "allegorical" novel about the events on Palmyra, in which he asserted that he was having an affair with Muff Graham, and that Mac went crazy after discovering them in the act. Supposedly Walker killed him in self defense after Mac killed his wife. Everybody familiar with the case regards this theory as utter hogwash. Walker died in 2010.

Where is Mac Graham? Is he still in the other metal box? Logically, if there were two boxes, it doesn't make much sense that Walker would have done something different with his body than he did with Muff's, but we'll never know. Perhaps he murdered them at different times and different places around the island. When told that authorities were searching the island yet again for Mac's remains, Walker is said to have remarked, "Go ahead and search. You'll never find him." To this day no one ever has.

The strange goings-on at Palmyra Atoll were remarkable enough to spawn a legend about the island being unlucky, and today you'll still hear Pacific travelers talk about the "Palmyra curse." There are evidently makeshift memorials to the Grahams on the island, which is private property and illegal to trespass upon, but naturally being so remote it's difficult to police. Palmyra is today owned by the Nature Conservancy and is the site of some climate change research.

Vincent Bugliosi, Stephanie Stearns's attorney, wrote a book about the murders called And The Sea Will Tell. It was made into quite a good TV miniseries in 1991, but as it aired during the ground phase of the first Gulf War, almost nobody saw it. I keep waiting--in vain--for it to pop up on Netflix. Sadly, Mr. Bugliosi passed away in 2015.

Specifically with regard to Stephanie Stearns's murder trial, here is a video I made about that issue:

The image of Mac Graham is from the book And The Sea Will Tell by Vincent T. Bugliosi and Bruce Henderson. This is the only known photo of a person of public interest, so I believe my use of it here constitutes fair use. The other images are public domain.