A cruel distortion of history: No, Hitler was not a leftist. 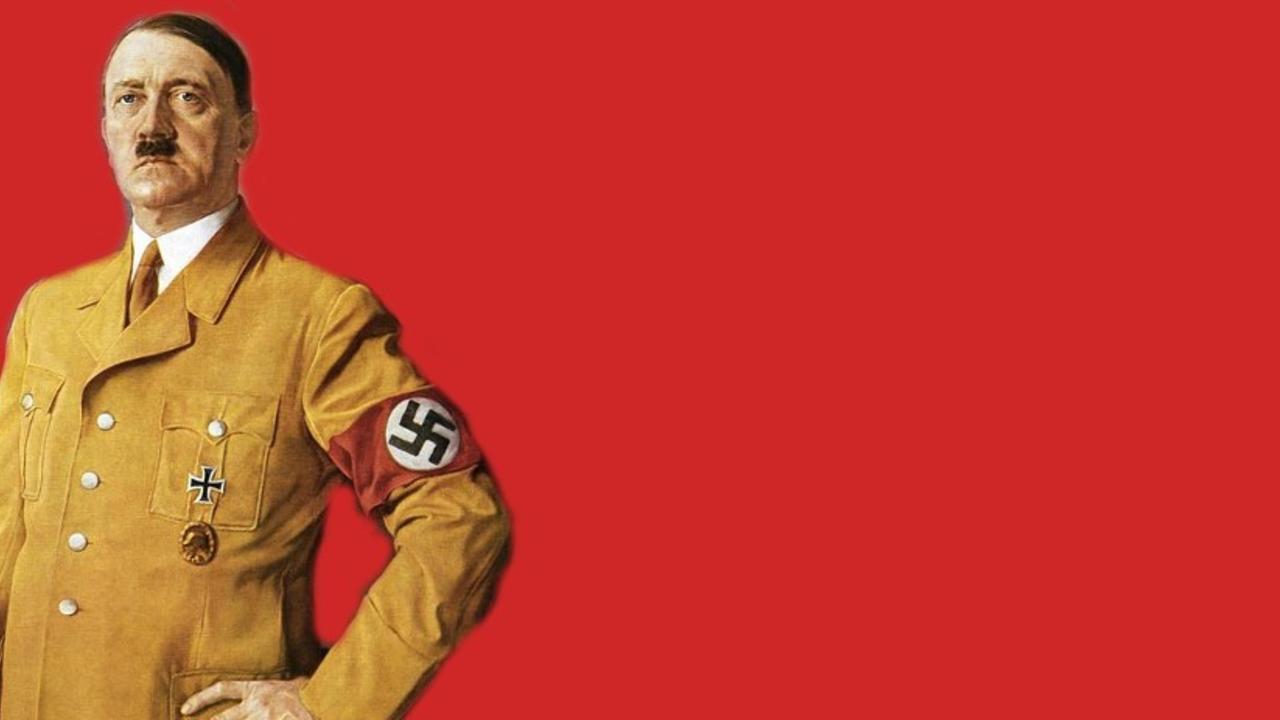 On the previous incarnation of this blog I published an article (which I will re-post again) about the history and implications of the wave of suicides in Germany in the spring of 1945, during the collapse of the Nazi regime. One day I found a comment in the queue for that article. The commenter, not a regular reader, evidently objected to a reference I made in the article to Nazism being an extreme right-wing ideology, and this characteristic perhaps having something to do with anguished Nazis' refusal to consider living in a post-Hitler world. The comment asserted bluntly that "The Nazis were left-wing." I didn't approve the comment, but it stuck out in my mind, as it's not the first time in the past year or so that I've encountered someone who believed Adolf Hitler and the Nazi Party were actually socialists or somewhere else on the left-leaning side of the political spectrum. Apparently this factoid is an article of faith among some people on social media or the blogosphere, strange as this seems. Unfortunately it's not only wrong, but it's a cruel and in fact dangerous distortion of history that deserves to be set right.

There are a lot of myths out there in popular culture about Hitler and the Nazis, which due to their prominence in recent history attract a lot of attention from non-historians. There is, for example, the myth of "Nazi occultism," which has proven to be something of a cottage industry in pseudohistorical circles. While I don't think the "Hitler was a leftist" myth is nearly as widespread, it appears that some people do believe it. I also respectfully submit that which end of a standard left-right political spectrum Hitler belongs on is neither a matter of opinion nor in the eye of the beholder. Historically we can be certain of a number of facts about Hitler, his ideology and the political orientation of the movement he championed, and in whose service he got the German people to commit so many monstrous crimes. 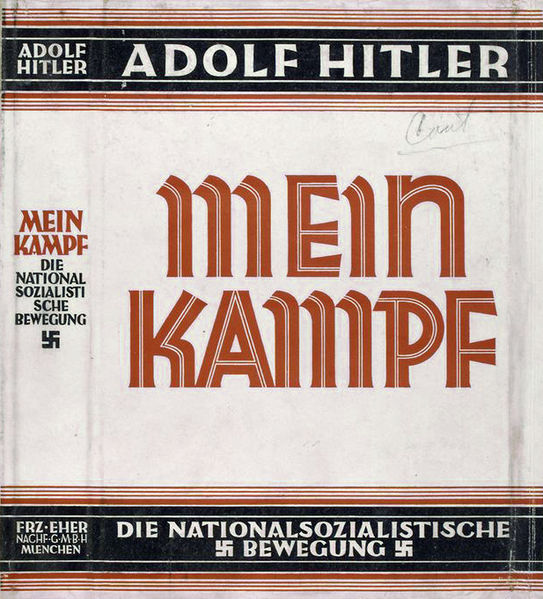 Hitler set out his political philosophy--such as it is--in his book Mein Kampf ("My Struggle"). It is unabashedly right-wing and authoritarian.

At least compared to other political thinkers, such as Lenin, Mao Zedong or Sun Yat-Sen, Adolf Hitler's ideological thought was not very well-developed. He was not a learned man and his grasp of history and philosophy was slender at best. Mein Kampf, the turgid tome that Hitler dictated to his Nazi deputy Rudolf Hess while he was in prison after the failed 1923 "Beer Hall Putsch," is not nearly as coherent a political treatise as some of the other books and tracts that political movements over the years have seized upon as their source-code documents. Hitler was mainly reactive in his thinking: reacting to what he saw as the intolerable political and social conditions of the Weimar Republic, the international climate after World War I, and especially what he perceived as a dire racial threat from the very existence of Jews. Mein Kampf illustrates Hitler's tendency to conflate the two groups he hated most: Jews and Communists (or Bolsheviks, the term he favored). In fact much of Nazism was based on the certainty that a "Jewish Bolshevik" conspiracy was somehow strangling Germany, and the political movement he wanted to lead aimed to break that power.

Absolutely none of this can be pegged to the left side of a traditional left-right political spectrum. By its nature fear of an "other," especially one defined partly or wholly by racial or ethnic characteristics, is a telltale sign of an authoritarian world-view. In his run-up to power in the early 1930s and after he became the leader of Germany in January 1933, Hitler was unerringly hostile to Communists, socialists and leftists of any stripe. The Social Democratic Party of Germany were the Nazis' main opponent in the tumultuous cycle of elections that led up to 1933, and the Nazi state cracked down on this party after they attained power. Hitler had no toleration for parliamentary democracy, which he regarded as weak, or the priorities of traditionally leftist European parties, which he saw as indistinguishable from the Communism he hated. He always identified Stalin as his worst enemy. The historical record is replete with examples of Hitler's hostility to any form of liberalism, progressivism or left-leaning politics. His was a rigidly right-wing state. 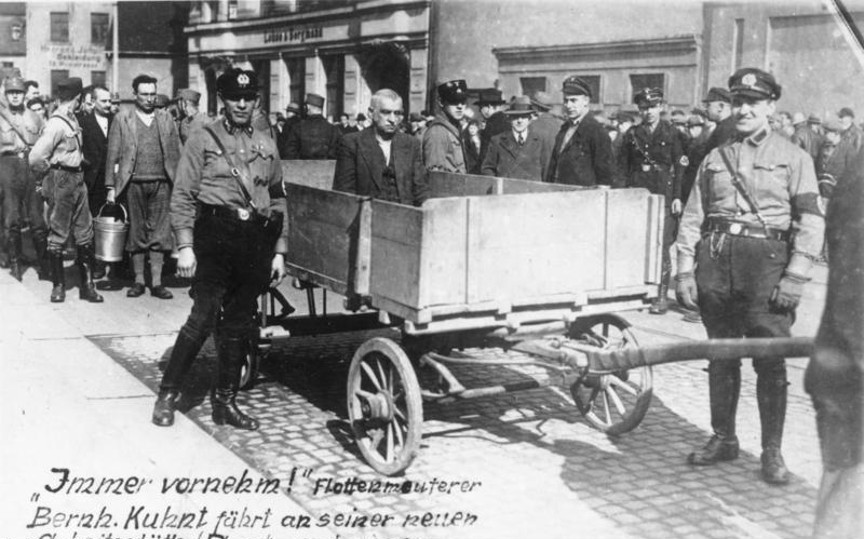 The Social Democratic Party of Germany, which was leftist, was brutally repressed after the Nazis came to power in 1933. Here, Nazi toughs humiliate a prominent SDP member, Bernhard Kuhndt.

The erroneous impression that Hitler was some sort of leftist seems to stem, in my estimation, from two premises, both of which are historically inaccurate. The first is the official name of the Nazi Party, which in its full form was the "National Socialist German Workers' Party" (NSDAP in German). That certainly does sound like a leftist party, doesn't it? In reality, though, the "socialism" of the Nazi Party had nothing to do with how that term is traditionally defined, and as we have seen, the Nazis actually hated socialists. The presence of the word in the name of the party was essentially a marketing tool. The same kind of thing happened in the later 20th century when Stalinist regimes and puppet states would call themselves the "People's Democratic Republic of" whatever country they were. A rose by any other name.

The second premise is an uncommonly silly one: that Hitler and the Nazis believed ultimately in the power of the state, and that meant they were in favor of "big government"--which in the view of some is indelibly associated with left-wing politics. This premise has no validity. The terms "big government" and "small government" are used somewhat disingenuously today by some modern conservatives, especially in the United States, but the exact parameters of these terms are too nebulous to be of any use in determining ideology. There is no correlation in history between the "size" of a government and how "free" (or unfree) it is. For example, the Qing (Manchu) Dynasty in China, which existed from 1644 to 1911, was an infinitesimally small elite that ruled over a vast country pretty effectively. It was clearly a "small government," yet China in the dynastic period was a highly repressive, rigid and conservative society. By contrast, the modern democracies of Scandinavian countries like Norway, Sweden and Iceland proudly identify as socialist or quasi-socialist, with systems of socialized medicine, free education and nationalized industries--what many people think of as the epitome of "big government." Yet these countries consistently rank as the most free, open and liberal states in the world. Thus it's clear that the terms "big government" or "small government," even if they were applicable to Nazi Germany, don't tell us much about a country's ideological orientation. 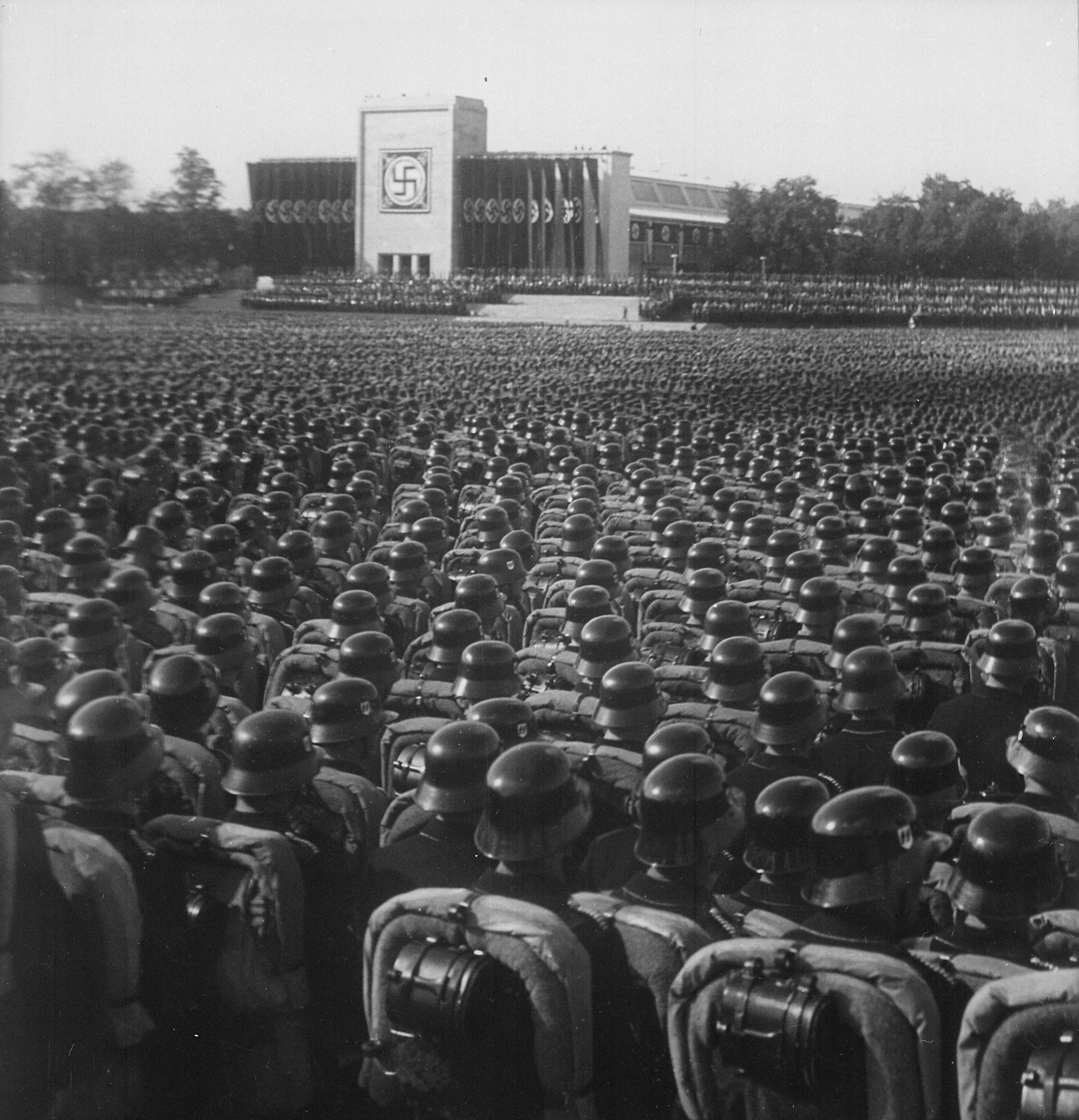 From the very beginning the Nazi state pursued heavily militaristic and expansionist objectives. This is not a characteristic usually associated with socialist regimes, though there are exceptions.

Few subjects in history are more apt to be misused in modern political debates than Hitler, the Nazis or anything connected with World War II. But historical fact stands apart from political spin. Let's get the facts right. Hitler was not a leftist or a socialist. He just wasn't. No modern attempt at revisionism can change the past.

The photo of the SDP member being humiliated is credited to the Deutsche Bundesarchiv, Bild 183-18450-0002 and is used under Creative Commons 3.0 (Attribution) license. All other images are in the public domain.